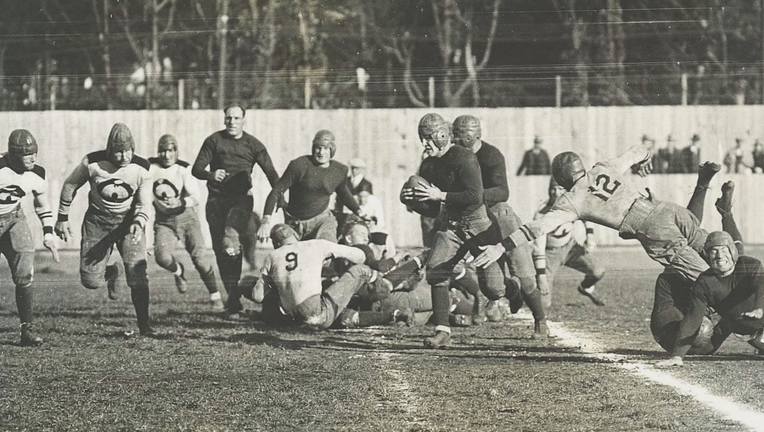 The Duluth Eskimos (white) chase down an opposing ball-carrier during their historic road trip that some say saved the NFL. (Minnesota Vikings Museum / FOX 9 Minneapolis-St. Paul)

EAGAN, Minn. (FOX 9) - Long before the Minnesota Vikings represented the North Star state, another professional football team in Duluth was once credited with saving the NFL.

It was a team legendary Chicago Bears Coach George Halas called “The best football team ever put together.” Now a juggernaut in its 100th season, the NFL may not be what it is today without them.

Long before the Minnesota Vikings represented the North Star state, another professional football team in Duluth was once credited with saving the NFL.

The Duluth Eskimos were founded by a promoter named Ole Haugsrud, who bought the struggling Duluth Kelleys from the NFL for a dollar. Haugsrud also convinced his good friend Ernie Nevers to play for the team.

“What we love about the Duluth Eskimos story is that it tells the grit of football in Minnesota from the beginning,” said Erin Swartz, the Vikings Director of Brand and Creative. “Players willing to put it on the line to create a great show for fans and play football.”

While Nevers was one of football’s first celebrities, nobody wanted to come to Duluth to play the Eskimos in the cold weather.

So, after only one home game, the team embarked on what’s called the longest road trip in sports history. They traveled 17,000 miles to play 29 games in four months. 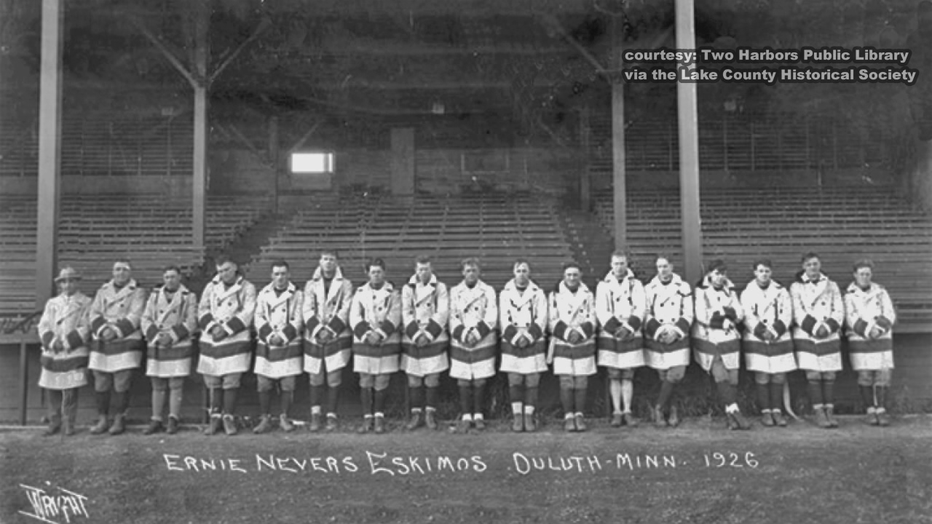 “Everywhere they went, they were met by crowds. They wore these iconic mackinaw jackets. Train stations were lined with fans cheering for them everywhere they arrived, not just because of this great marketing, but they were good,” said Swartz.

Chuck Frederick, the author of the book “Leatherheads of the North”, says the Eskimos were the first NFL team to hold training camp, huddle before a play and wear a logo – an igloo – on their uniforms. 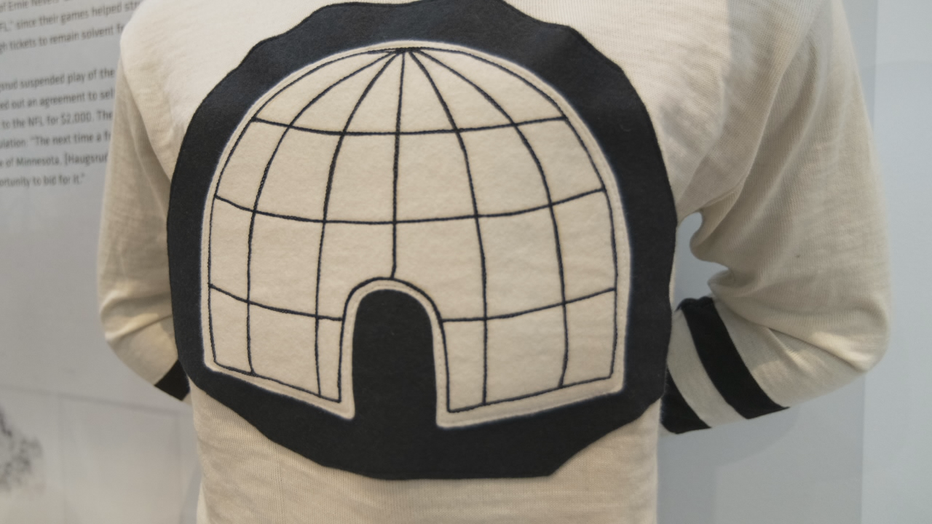 Besides being the first team to hold a training camp and to huddle before plays, the Duluth Eskimos also broke ground as the first team to wear a logo on their uniform. (Minnesota Vikings Museum / FOX 9 Minneapolis-St. Paul)

Their barnstorming tour of the country was so popular that the NFL’s then-commissioner credited them with rescuing the struggling league from financial ruin.

“I definitely believe that,” Frederick said. “If it wasn’t for the Duluth Eskimos, the NFL wouldn’t be around today. The NFL would have gone bankrupt like so many other upstart leagues. There was too much competition.”

After their first successful season, the Eskimos were left out in the cold. The traveling team only won one game the following year and folded in 1928.

Haugsrud eventually sold the team back to the NFL with the condition that he got the first rights to any future league franchises in Minnesota. When the NFL voted to give Max Winter and a group of investors an expansion team 30 years later, Haugsrud became a 10 percent owner of the new Minnesota Vikings.

“He’d make reference to football, mostly the toughness. You had to be tough to be a football player as opposed to a baseball player which was more skill,” said Grant.

A fictionalized version of the Eskimos story starring George Clooney and Jon Krasinski even made it to the silver screen.

“That was a huge deal,” Frederick said. “Renee Zellweger and George Clooney came to Duluth to help launch the movie. They rode in on a train car just like in the 1920s. I think it’s really exciting. I thought it was great fodder for a Hollywood movie.”

Nevers and two other players from the team were part of the first class ever inducted into the Pro Football Hall of Fame, but the leatherheads of the north’s real legacy is the unique place the team holds in NFL history.

“It’s just fascinating that this small town was able to have a team and was able to play such a pivotal role at a very dangerous time for the league and keeping the league going,” Swartz said. “It’s just something we can be very proud of.”

The Duluth Eskimos story is on display at the Vikings Museum at TCO Performance Center, along with many other pieces from the Vikings’ storied past.