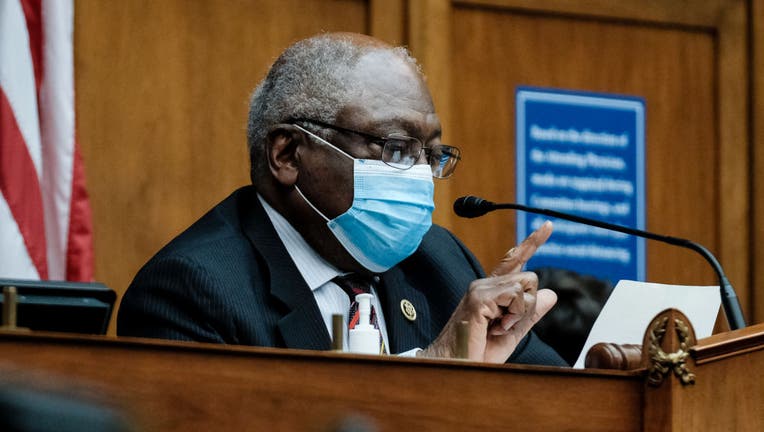 A file image taken Oct. 2, 2020 shows Rep. James Clyburn, D-SC, listening to Health and Human Services Secretary Alex Azar at a hearing before the House Select Subcommittee on the Coronavirus Crisis in the Rayburn Building in Washington, D.C. (Photo

WASHINGTON - Trump administration political appointees tried to block or change more than a dozen government reports that detailed scientific findings about the spread of the coronavirus, a House panel investigating the alleged interference said Monday.

Rep. James Clyburn, D-S.C., said his coronavirus subcommittee investigators have found evidence of a "political pressure campaign" to "bully" professionals at the Centers for Disease Control and Prevention in what may have been an attempt to "cripple the nation's coronavirus response in a misguided effort to achieve herd immunity."

Herd immunity is shorthand for a theory — rejected by most public health experts — that society can be best protected by allowing younger people to get infected and develop natural immunity until vaccines are widely available.

Accusing Health and Human Services Secretary Alex Azar and CDC Director Dr. Robert Redfield of stonewalling his investigation, Clyburn issued subpoenas to compel them to turn over reams of documents and emails by Dec. 30.

In a statement, HHS responded that there was no political interference, adding: "While the administration is focused on vaccination shots, the subcommittee is focused on cheap shots to create headlines and mislead the American people."

Dr. Robert Redfield, head of the Centers for Disease Control and Prevention, discussed the state of the coronavirus pandemic in the U.S. heading into the holidays.

The committee's topline findings were detailed in a 20-page letter to Azar and Redfield that centered on the actions of two political appointees earlier this year at HHS. New York political operative and Trump loyalist Michael Caputo was installed as the department's top spokesman during a period of high tension between White House officials and Azar. Caputo brought health researcher Paul Alexander with him as an adviser. Both men have since left the agency.

But for months, the letter alleges, they waged a campaign to block or change articles on the COVID-19 pandemic in a CDC publication called the Morbidity and Mortality Weekly Report, or MMWR, which is closely followed by the public health community.

With Alexander firing off internal emails, investigators said the campaign:

— Sought to block or change more than a dozen MMWR articles, sometimes succeeding in getting changes to draft language and at other times delaying publication as internal arguments raged.

— Intensely challenged articles that detailed scientific findings on the spread of COVID-19 among children. This came during a time when President Donald Trump was adamantly urging a return to in-person schooling in the fall. Those included reports about outbreaks in summer camps, data on hospitalization rates among children, and findings about a dangerous condition called "multi-inflammatory syndrome," which afflicts some children who get sick from the coronavirus.

— Attacked a draft MMWR article showing a jump in prescriptions for hydroxychloroquine, an anti-malaria drug that Trump embraced early on as a "game changer" only to ultimately learn it could do more harm than good. HHS even went so far as to draft an op-ed rebutting the CDC article, although it was never published. The op-ed accused the MMWR authors of trying to grab headlines, calling them a "disgrace to public service."

While some HHS career officials apparently tried to defuse Alexander's criticism by making changes in wording or headlines of MMWR articles, at least one confronted the pressure tactics.

Bill Hall, a senior career spokesman, wrote to Caputo and Alexander to explain that the CDC's publication was akin to a peer-reviewed scientific journal and that HHS historically had respected its independence. The HHS public affairs office that Caputo once headed "is not a science or medical program office," wrote Hall. "As a matter of longstanding policy, we do not engage in clearing scientific articles, as that arena needs to remain an independent process."

Clyburn explained he took the step of issuing subpoenas in part because his investigation has turned up evidence suggesting attempts to destroy records. A congressional demand for materials raises the legal stakes for anyone attempting to destroy or conceal materials.

Dr. Charlotte Kent, CDC's chief of scientific publications, previously told committee investigators she was ordered to delete an email from Alexander attacking an MMWR article on coronavirus transmission among children. Kent said she believed the order had come from Redfield. It was transmitted to her through another official.

Redfield responded at the time that he had told CDC staffers to ignore Alexander's email, and that he is fully committed to maintaining the independence of the MMWR health reports.

HHS said Monday that Kent's email "was never deleted – it was archived."