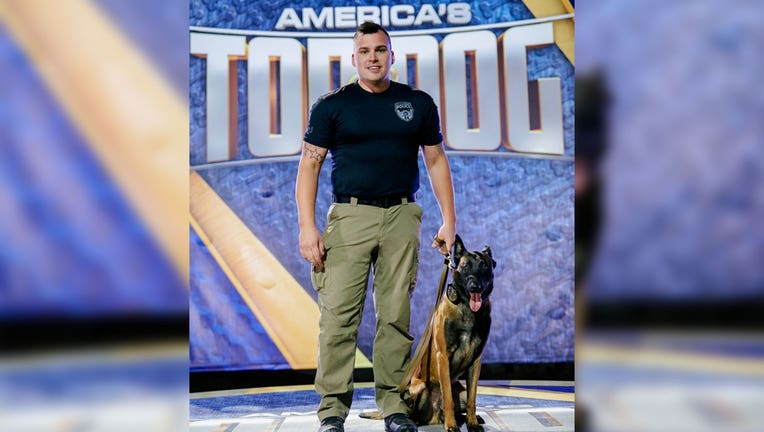 K9 Chase and Officer Burns pose for a photo before competing in the competition.

HIBBING, Minn. (FOX 9) - Chase, a police K9 from Hibbing, Minnesota is one of 16 Police K9s selected to compete in this season of A&E’s competition show "America’s Top Dog."

Chase was selected out of thousands of dogs after his handler, Hibbing Police Officer Joey Burns, put in an application after watching an episode of the show.

A police K9 from Hibbing, Minnesota is competing on the A&E show "America's Top Dog."

"I was sitting there watching, I was thinking how cool it would be to get the opportunity to do something like that." Burns said.

After learning they were selected, they had a few weeks to train for the show. Burns said he had to teach Chase a few new, specific skills for the show like pressing a button and jumping off a dock into the water. The show puts dogs through an intense obstacle course, something they practiced leading up to the filming of the show in September.

"The obstacles were nothing that we could really build or replicate but the main thing I did was come to parks like this and I would run him on the playground equipment," Burns said.

Burns says he hopes to represent Minnesota well on the show.

"My biggest hope is that I can not only make the Iron Range and the community of Hibbing where I’m from in Grand Rapids and the Iron Range proud, but I can make all of Minnesota proud," Burns said.

Burns has also been working with state lawmakers to get a bill passed that would allow emergency first responders to give medical aid to police K9s in the field if they are injured. Right now in Minnesota, a person can face misdemeanor charges for giving medical aid to an animal.

Chase was donated to the Hibbing Police Department by McDonough K9 based in Blaine.

Burns is not giving away any secrets on how Chase did in the competition. You can watch Chase and Burns on "America’s Top Dog" on A&E at 7 p.m. on Tuesday, July 13.