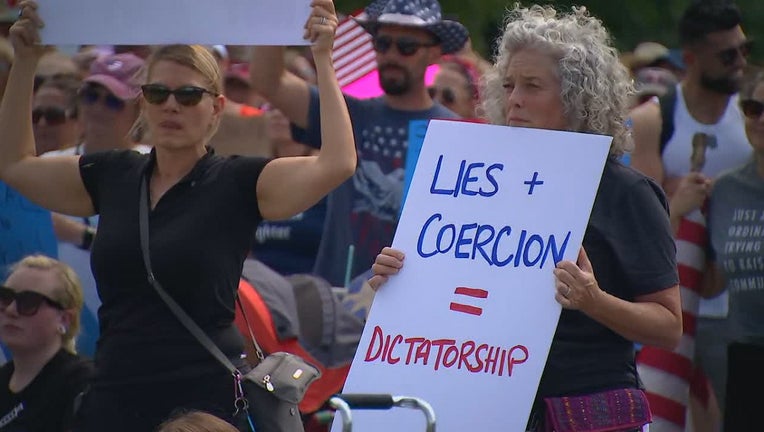 ST. PAUL, Minn. (FOX 9) - Days after the FDA gave full approval to the Pfizer COVID-19 vaccine for adults, triggering some companies to move forward with new vaccine requirements, a group gathered in the Minnesota State Capitol to oppose mandates.

While the large protest in front of the state capitol Saturday morning was not necessarily an "anti-vaccine" rally," speakers rather were speaking out against vaccine mandates.

The protesters say they don’t want to be forced into getting vaccinated; they say they want to be able to make informed health decisions for themselves.

At the same time, they admit they’re also skeptical of the vaccine due to breakthrough cases that are being seen, particularly as the Delta variant starts making rounds.

The sea of people flooded in front of the state capitol on Saturday. They brought hundreds of signs, but across the board, the message was close to the same.

"There are lots of folks here who have been vaccinated," said Dr. Scott Jensen. "I think what it’s all about is each person gets to have a choice."

Family physician and former Republican State Senator Dr. Scott Jensen is running to be the next Governor of Minnesota, and he spoke at the protest.

"The fact of the matter is sometimes dangerous freedom is better than some sort of safe bondage," said Dr. Jensen.

Because of this event, as well as other rallies planned over the weekend, fencing was reinstalled around the state capitol.

"I’m offended by the fence going up. This is the People’s house, I don’t see where the danger is," said Jensen.

Others in the crowd believe the real danger lies in vaccination and they argue it’s a choice that should be left to people rather than businesses and employers.

"There’s plenty of reasons to be a little fearful of the COVID-19 vaccines," said Dr. Jensen. "But that doesn’t make them any less of a game-changer going forward."

At the same time in New Hope, Ambrose Russell, the founder of The Inner Hero organization, had a different message.

"I believe for life to go back to better - not normal, but better - we have to get vaccinated," said Russell.

Russell spent the day offering around 200 vaccines at the event.

"Everything has become politicized in this culture and nowadays that’s something that will protect, and people will fight against it," said Russell. "It's so sad that people don’t have or don’t want the rightful information. The vaccine helps give you a higher chance of surviving so take your vaccines, take your vaccine."

Again, Minnesota state health leaders all recommend people who are eligible to get vaccinated do so. The FDA also gave full approval to the Pfizer COVID-19 vaccine this week after undergoing rigorous testing and review to make sure it was safe and effective.

Minnesota has since opened back more vaccine sites across the state and if you get vaccinated at the state fair you can get $100.