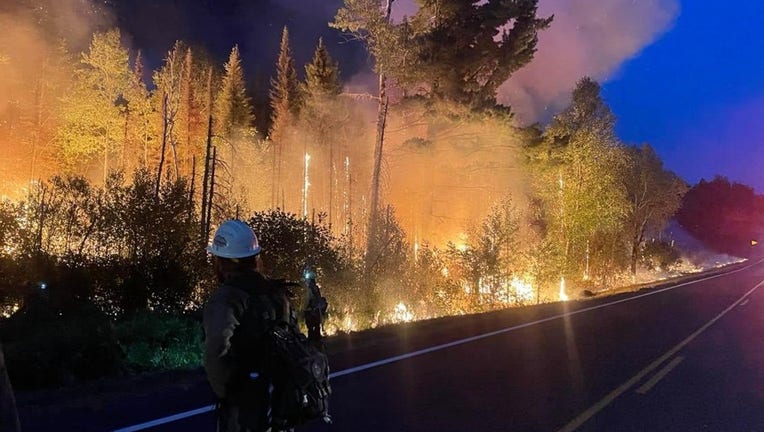 ISABELLA, Minn. (FOX 9) - The Greenwood Fire in the Superior National Forest did not grow any larger overnight as firefighters took advantage of cooler conditions to improve fire lines, according to the U.S. Forest Service.

The fire, which began on Aug. 15 from a lightning strike, is estimated to span 25,991 acres and is still 0% contained.

The Greenwood fire burning in northern Minnesota has now grown to more than 25,000 acres while continuing to threaten structures across the Superior National Forest.

Friday, firefighters will continue to hold fire lines and maintain defensive fire strategies along Highway 1 and Stony River Grade Road to protect the community of Isabella and nearby buildings.

So far, the fire has destroyed 12 cabins and homes and 57 structures. Evacuation orders remain in effect for McDougal Lake, Sand Lake, the Highway 2 corridor, and north of Highway 1 in the vicinity of East and West Chub lakes, Jackpot, Slate Lake and the Mitawan Lake Road area. Highway 2 is closed from Forest Highway 11 to Highway 1. Highway 1 is closed from New Tomahawk Rd to Lankinen Rd.

While the weather is expected to remain cool with highs near 60 degrees, wind gusts could reach as high as 30 miles per hour.

Firefighters are also on the ground for the John Ek and Whelp fires, which remain at 1,563 acres and 50 acres respectively. Authorities believe lightning cause both fires, which are each located in the Boundary Waters Canoe Area Wilderness. The BWCAW is closed due to fire activity and limited personnel.

The Minnesota Department of Natural Resources announced starting Monday, dispersed camping in state forests and backcountry camping in state parks will be closed the northern portion of St. Louis County, and all of Lake, Cook, and Koochiching counties. This excludes four designated backcountry sites at Split Rock Lighthouse State Park.