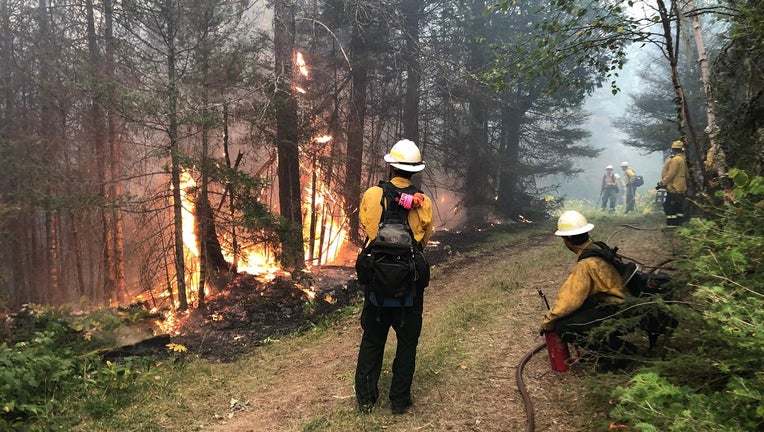 (FOX 9) - The Greenwood fire burning in northern Minnesota has now grown to more than 25,000 acres while continuing to threaten structures across the Superior National Forest.

The fire remains at zero percent containment as fire crews tried to take advantage of improving weather conditions on Wednesday and Thursday. Wednesday, crews also burned defensive boundaries along the perimeter of the fire with hopes of slowing and stopping the spreading flames. Thursday, the U.S. Forest Service said they hope to continue containment in those areas with help from bulldozers, aerial equipment, and 476 crew members on the ground.

The Greenwood fire burning in northern Minnesota has now grown to more than 25,000 acres while continuing to threaten structures across the Superior National Forest.

As of Thursday, 12 homes and cabins had been destroyed in the fire along with more than 50 outbuildings.

Shifting winds have also pushed smoke as far south as St. Cloud while air quality warnings remain in effect for areas in and around Minnesota's arrowhead region.

For businesses in northern Minnesota, the fires have brought an unfortunate slowdown during the busiest part of the season.

"It would be very busy here, at least up through the Labor Day season coming up," said Canoe County Outfitters President Robert Olson.

Robert Olson says his calendar was booked up a week ago for canoe reservations but now he's down to almost none.

"This is our only business," said Olson. "We’re not open in the winter. This is our summer business based on May through early October."

"Little fires aren’t that big of a deal," added Olson. "They just close off a certain area. But to close off the whole Boundary Waters is a killer for businesses, you know."

The Boundary Waters Canoe Area Wilderness closed last week due to the encroaching fires. It was expected to be closed for at least seven days.