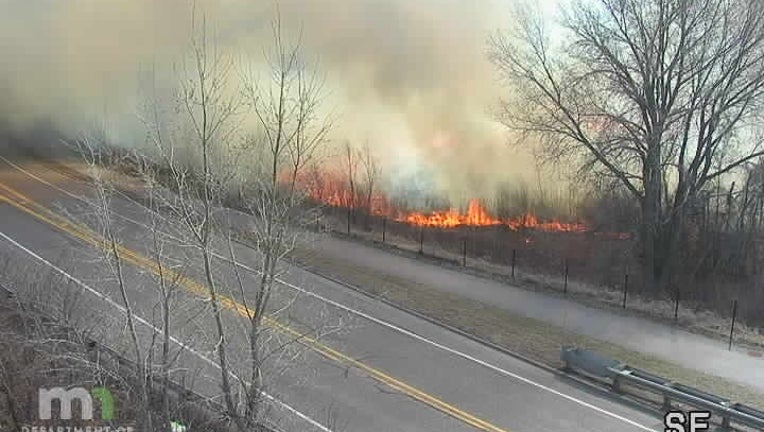 LINO LAKES, Minn. (FOX 9) - A grass fire burned over 100 acres along I-35W in Lino Lakes, Minnesota Tuesday afternoon and the smoke from it could be seen on radar.

The Minnesota Department of Transportation issued an alert to watch out for the grass fire at 1 p.m. By 2:30 p.m. it spread. The fire burned near the northbound lanes, but the interstate did not close. Smoke appeared to limit visibility in the area as cars moved slowly through it.

A helicopter assisted in the effort to fight a fire along I-35W in Lino Lakes, Minnesota Tuesday. (Video: Erik Olson)

Multiple crews worked to get the fire under control. As of around 5:30 p.m., the blaze was largely under control with firefighters working to put out hot spots, according to Lino Lakes Public Safety Fire Division.

Officials say the fire burned 118 acres of land and came within 50 feet of two homes, but luckily no buildings were damaged.

"It just came all the sudden," said Luann Walkup a homeowner who was evacuated. "Rick called and just said, 'I think you better make sure you’re ready to leave the house just in case.' And I walked outside and saw huge dark cloud of smoke and thought, 'Oh, better get moving.'"

Due to the location of the fire, officials believe the fire started from a cigarette that was thrown out of a passing vehicle.

The smoke was heavy enough to appear on weather radar Tuesday afternoon as crews battled the blaze.

Smoke from a grass fire burning along I-35W in Lino Lakes Tuesday appeared on weather radar.

FOX 9 Meteorologist Cody Matz said high winds were contributing to the spread of the fire, Tuesday.