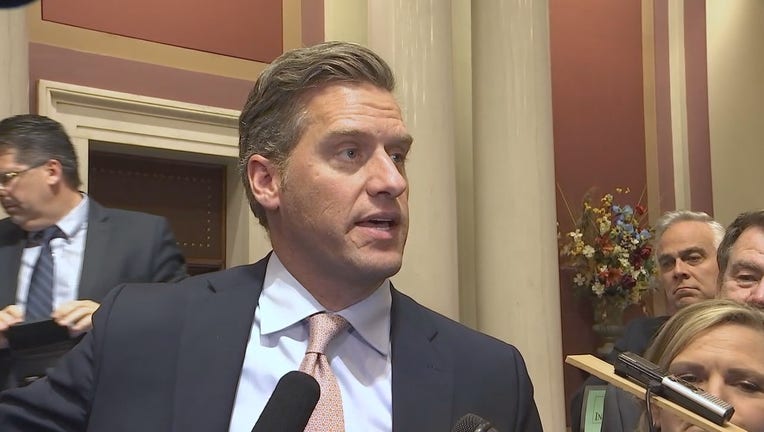 House Minority Leader Kurt Daudt is taking a part-time job as director of public affairs at Stateside Associates, a consulting firm that connects major companies with lobbyists in statehouses and city halls across the country. Lawmakers from both parties question the move.

House Minority Leader Kurt Daudt is taking a part-time job as director of public affairs at Stateside Associates, a consulting firm that connects major companies with lobbyists in statehouses and city halls across the country. Lawmakers from both parties question the move.

Daudt, R-Crown, said he won’t be a lobbyist or do work related to Minnesota. But the fifth-term lawmaker’s situation has renewed interest in Minnesota’s ethics laws, and House Majority Leader Ryan Winkler said he planned to see if changes are required.

“We have economic disclosure statements. I think we could do more -- and probably need to,” said Winkler, DFL-Golden Valley. “Because if there isn’t a clear prohibition on what Rep. Daudt is doing, I think we need one.”

Daudt was out of town this week and was unavailable for an interview, said Andrew Wagner, a spokesman.

A part-time legislature like Minnesota’s encourages lawmakers to have outside jobs. In Minnesota, lawmakers are prohibited from lobbying, but are allowed to take virtually any other job.

That puts the onus on lawmakers to police themselves. Watchdogs worry that Minnesota’s disclosure requirements are too weak to stop conflicts of interest.

“We hit a high point in the early 1990s, and since then, we’ve done almost nothing in terms of updating our laws,” said David Schultz, a Hamline University professor and former executive director of the watchdog group Common Cause Minnesota. “We’ve just fallen behind the standards of where everybody else is.”

Of the state’s 200 lawmakers, 131 of them reported outside streams of income to supplement their $46,500 a year legislative salary, plus per diems and travel allowances. The information is contained within public disclosure forms reviewed this week by FOX 9.

The state Legislature counts 44 businesspeople, 17 lawyers, 10 educators, a truck driver and a bartender among its ranks.

Every year, Minnesota lawmakers must fill out a statement of economic interest. On the form, they’re required to list their occupation – “retired” or “legislator” apply – plus any outside sources of income greater than $50.

Lawmakers also must report any securities they own, along with any property – their own home is excluded from the reporting requirement. Lastly, they have to report their horse racing investments or ownership.

But lawmakers often do not disclose their entire client lists on the forms. Ultimately, the information collected every year is so sketchy, out of date and poorly enforced that it’s of little value to voters, Schultz said.

“What prevents people from voting when they have conflicts of interest? Really, the answer is not very much,” he said.

Failing to make the grade

In 2015, a report from the nonpartisan Center for Public Integrity gave Minnesota a D-minus grade and said the state’s “squeaky clean image hides a nest of ethical problems.”

The Minnesota Campaign Finance Board, the body that collects lawmakers’ statements of economic interest, is reliant on the state Legislature for funding and doesn’t have the resources to audit the disclosure forms, watchdog groups say.

The ethical issues span both parties. In recent years, two DFL lawmakers have resigned outside jobs amid concerns.

In one case, state Sen. David Tomassoni quit his job with an Iron Range group because the organization lobbies Minnesota lawmakers. Then, earlier this year, state Rep. Jamie Long resigned his position with the University of Minnesota amid allegations of preferential hiring practices.

In Daudt’s case, Stateside Associates said he will help clients with “his deep knowledge of the legislative process, public policy experience and access to elected and appointed leaders and officials in all 50 states.”

Lawmakers from both parties questioned why Daudt was not resigning his seat, for which he’s paid $65,100 a year because he’s in House leadership.

Drazkowski owns a business that sells shoes, and said he would recuse himself from any vote that “addresses my business specifically.”

Winkler, the majority leader, works as in-house counsel for Linkup, a job search data group. He said the companies he’s worked for do not lobby the Legislature.

“There’s no connection whatsoever between the political campaign and legislative work I do and my work as a private attorney, and that’s how the Legislature is supposed to work,” he said.