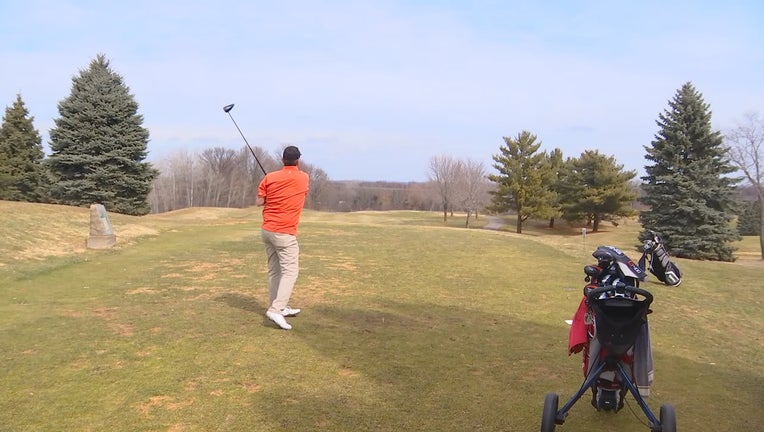 A golfer admires his drive during some unseasonable March warmth.

(FOX 9) - Tuesday felt more like a day in late April than early March, leading Minnesotans the rare opportunity to take to both the slopes and the links.

At Burnsville’s Buck Hill, people appreciated the warmth and the slushy conditions.

It was a warm March day across Minnesota, so people opted outside both on the slopes and the links.

"The snow can get sticky, but the warm weather is nice," Devon Karo said.

The recent warm-up in Minnesota has brought about a wardrobe change for skiers and snowboarders.

It’s not often we can say people are skiing and golfing at the same time, but Tuesday was just one of those days.

"We were able to play up until Dec. 22 last year, and now here we are early March. One golfer said it’s been only 62 days since he was last able to tee it up," Kevin Unterreiner, of Twin Cities Golf, told FOX 9. "There were people walking and playing in shorts today, so everybody’s just thrilled."

"For the last 20 years that I’ve been in the business, this is the earliest date that courses have actually been open," Unterreiner said. "We expect… for the season."

"I’m glad they were open today," golfer Brett Hueckman said. Hueckman got his round in at Stonebrooke Golf Club. "I did alright, lost a few balls. You know, plugged, it’s a little wet in some spots," Hueckman said.

Unterreiner says Stonebrooke is one of just four courses in the state open as of Mar. 9. The others are Montgomery National Golf Course, CreeksBend Golf Course and ShadowBrooke Golf Course.

"It actually was in pretty good shape, considering there was a couple of greens that were a little wet," Hueckman said of Stonebrooike. "But, for the most part there wasn’t that much snow out there."

"The greens are actually pretty soft, surprisingly, with the melting of the snow they are soft," Unterreiner said of CreeksBend. "When we were playing in November and December it was like playing on the driveway so you had to lay up shorter."