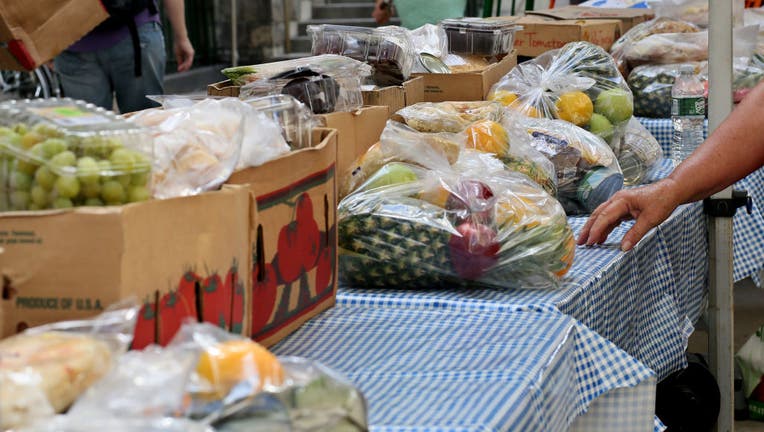 Volunteers help in a Food Pantry on July 26, 2022 in New York. Food prices in the New York area have jumped more than 9% in the last year, is the steepest in the last 40 years, according to the BLS. (Photo by John Smith/VIEWpress)

The pandemic highlighted an issue that has been problem for many Americans long before COVID-19 — hunger, according to a recent report by Feeding America.

"Hunger is the physical sensation of not having enough food," said Cassidie Carmen Bates, government and public affairs manager of Food Bank of Contra Costa & Solano in California.

It is the lack of available financial resources for food at the household level.

Before the COVID-19 pandemic began in 2019, the national overall food insecurity rate was 10.9%, which was the lowest in 20 years, according to the report.

That translates to an estimated 38.3 million individuals living in a household that is defined as food insecure.

But the food insecurity levels differ "substantially" across the population as well as according to race and ethnicity, according to the Feeding America report.

The report noted all counties and congressional districts have people facing hunger, but 99% of counties have more Blacks and Latinos with food insecurity than White individuals. And the "counties with the highest rates of food insecurity are disproportionately rural."

FOOD BANKS FACE INFLATION STRUGGLES WITH SURGING DEMAND: ‘NEVER SEEN ANYTHING LIKE THIS’

"Unlike assistance provided by food banks and similar organizations, however, availability of government support typically varies based (in part) on household income. In the case of SNAP, state income thresholds range from 130% to 200% of the federal poverty line (between $36,075 to $55,500 for a family of four as of January 2022)."

Many of these people who don’t meet criteria for programs like SNAP (but are still food-insecure) resort to food banks, Bates told Fox News Digital.

"A food bank is a nonprofit organization that collects and distributes food to hunger-relief charities," according to Feeding America’s website.

"Food banks act as food storage and distribution depots for smaller front line agencies; and usually do not themselves give out food directly to people struggling with hunger."

They all rely on donors and volunteers to run their food banks, according to Feeding America.

But food banks are struggling to meet the higher demand due to decreased donations, supply chain delays and inflation, according to NPR.

"We are definitely seeing an increase in demand for food throughout our network of 700 community partners, including food pantries, shelters and soup kitchens," said Man-Yee Lee, spokesperson for the Greater Chicago Food Depository.

"Food Depository staff have heard from network partners and from guests at those sites that inflation and the rising cost of items like food and gas is negatively affecting them and their budget."

Lee told Fox Digital News that their network partners served 10% more households in April 2022 compared to the same month the prior year, which she attributes likely to financial pressure on households.

But it’s spending twice as much as two years ago just to keep up with rising food costs and increasing demand.

"This is due to increased prices, increased demand — also a shift in our procurement strategy to purchase more as donated food and government food supplies have decreased," Lee said.

"With inflation at a 40-year high — over 9% — prices for food items like eggs and meat are up by 19.4%, meaning that food is currently more costly now than other goods," said Joel Sjostrom, president and CEO of Food Bank of Contra Costa & Solano.

The California food bank works to meet the needs of the community through direct distributions every day of the week throughout its two-county service area.

"These prices continue to impact the most vulnerable in our community, especially in combination with elevated gas prices, supply chain shortages and the long-term effects of the pandemic persist," Sjostrom added.

He noted the food bank pursues "legislative advocacy alongside community advocates with lived experience with food insecurity to collectively build a stronger social safety net that effectively addresses the root causes of hunger in our region."

But food banks on the East Coast are also feeling the pressure, with one example in the state of Maine.

It ranks fifth in the nation for very low household food security and 1st in the New England area, according to the U.S. Department of Agriculture (USDA).

She told Fox Digital News that the food bank, which is largest hunger-relief organization in Maine, also is experiencing a surging demand.

"One of our partner agencies, Augusta Food Bank, located in central Maine, recently said the amount of food distributed by them has increased by 67% over two years ago and there’s no sign of it slowing down any time soon," Donahue added.

"There are 40-50 cars lined up along the road leading to our hunger-relief partner’s building every Thursday morning for Free Food Thursday. During the day, they usually see 85+ cars pass through — distributing 50,000 meals every month."

She emphasized, "And this is only one of our nearly 600 partners."

In the short term, Congress and the USDA should allocate more food through the Emergency Food Assistance Program for distribution through food banks to struggling families, Lee said.

"In the long term, Congress should take steps to strengthen our nutritional safety net."

She added, "For example, [Congress could] expand the Summer EBT [Electronic Benefits Transfer] program nationwide to make sure children have enough to eat even when school is out for the summer."

It could also work on "making sure monthly benefits through the Supplemental Nutrition Assistance Program (SNAP) are adequate for families to afford a nutritious diet throughout the month."