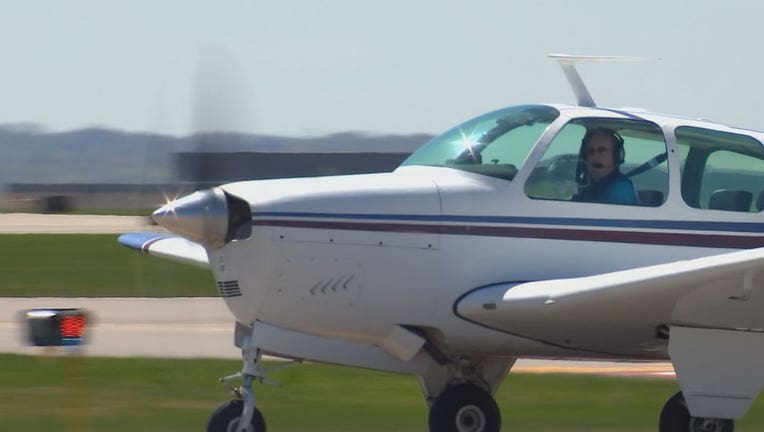 EDEN PRAIRIE, Minn. (FOX 9) - Major airports across the country saw a major dip in travelers throughout the pandemic, but one airport in the Twin Cities metro area saw air traffic soar to new heights.

When the pandemic really took off, so did business at Flying Cloud Airport in Eden Prairie.

When the pandemic really took off, so did business at Flying Cloud Airport in Eden Prairie.

Sydney Campbell, a pilot-in-training, said she wanted to start a new direction and a new career after being laid off at the beginning of the pandemic, so she found herself at Flying Cloud.

Flight Pilot Training, at Flying Cloud, is one of several flight schools there that have seen a jump in the number of people going for their licenses.

"We spent a little bit more money on advertising and reaching out to people and it worked," said Colin Hernon, a flight instructor. "We averaged probably six to 10 new individual or new students per week."

Aviation was deemed essential during the pandemic, which helped keep the planes moving.

While not all of Minnesota’s small reliever airports did well, Flying Cloud Airport saw a 19 percent increase in operations in 2020. Hernon says it was people of all ages deciding it was just time to fly.

"It’s an investment," he said. "You’ll have it for your whole life. So it’s pretty sweet, yeah."

Campbell agrees, saying it will likely take her another one to two years to be ready to land that job flying commercial planes, but she has no plans to slow down.

"Being a pilot was something, for some reason, I never pictured myself doing, whether I just didn’t have it in me to pursue this. And then, once the pandemic hit, I had this realization, like, why not me?" she said.

The aviation industry had an anticipated pilot shortage due to baby boomers retiring and Campbell will help fill that space, but Hernon says he is in line for it, too.