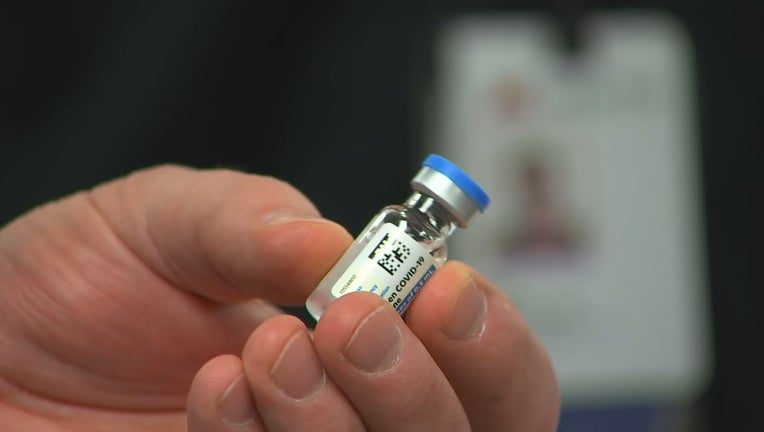 Governor Walz holds a dose of the Johnson & Johnson vaccine as shipments arrive in Minnesota. (FOX 9)

MINNEAPOLIS (FOX 9) - Minnesota saw another turning point in the fight to end the COVID-19 pandemic on Wednesday as the first doses of the Johnson & Johnson vaccine arrived in the state.

Governor Walz unpacked one of the first shipments of the vaccine, which was just approved for emergency use by the FDA and CDC this past weekend, as it arrived at a Fairview facility Wednesday afternoon in Minneapolis. The state expects to receive 45,200 doses this week of the new vaccine that is being hailed as a "gamechanger" by the governor.

Walz said Minnesota will not get any J&J doses next week, tracking with what the Biden administration has said. An increase of Pfizer and Moderna doses will offset that somewhat, Walz said.

J&J doses will start again in the third week of March and increase late in the month, Walz said, which also tracks with public promises from the Biden administration and J&J.

Governor Walz says Minnesota will "significantly beat" the original goal of vaccinating 70% of seniors by the end of the month, echoing what his health commissioner told senators Wednesday morning.

As the first doses of the Johnson &amp; Johnson vaccine arrive in Minnesota, state officials believe they can accelerate vaccinations.

And as Minnesota gears up administering doses, the governor also acknowledged the state would have to look to increase education surrounding the vaccine. He worries soon that available doses of the vaccines could outpace people looking to get vaccinated.

"There's a certain percentage of people who say they are not going to take it," said Walz. "Part of that may be that it's new, they didn't know it was there. We are also seeing in younger populations [who are eligible for the vaccine because of their jobs]... one of the answers those young folks are giving is 'we want to see others get it first.' They kind of feel like they are hopping the line. They're not."

The advantages of the Johnson &amp; Johnson COVID-19 vaccine

The Johnson &amp; Johnson single-shot COVID-19 could be the key to vaccinating a lot more people in a quicker timeframe for Minnesota.

The Johnson and Johnson vaccine was 72 percent effective in U.S. trials, falling short of some of the other two-dose vaccines. Despite the focus on the efficacy rates, Dr. David Hilden, of Hennepin Healthcare, said it's the best shot Minnesota has.

"What's really going to matter is the percentage of people that gone one of the vaccines regardless of which one," Hilden said. "That's our ticket out of this thing.

Hilden also pointed out that the Johnson and Johnson vaccine was 100 percent effective in preventing death and hospitalization.

Besides the obvious benefit of it being a single shot, the Johnson and Johnson vaccine also has shown to produce less severe side effects in the days following innoculation, it's had proven real world success against variants and it's far cheaper to make.

"They're going to be able to make this vaccine in quantities previously unheard of with the other vaccines," Hilden said.

Who's next in line?

Walz said he is considering moving all people ages 50 and older up in the priority list, as some other states have done. But no decision has been made.

Walz did not directly answer when asked when he’ll ease restrictions on businesses and gatherings.

He noted that the CDC is warning not to reopen quickly. He said the "brass ring" of the State Fair is within reach along with June weddings, too.