CAIR-Minnesota released documents they redacted Wednesday in order to give an update on an Eagan officer-involved shooting.

EAGAN, Minn. (FOX 9) - The family of a man who was shot and killed by police in Eagan, Minnesota this summer appears to be presenting a different narrative after adding their own redactions to investigation documents before releasing them to media.

Aden’s family obtained hundreds of pages regarding the investigation through a Freedom of Information Act request. Wednesday, they held a press conference with Minnesota chapter of the Council on American-Islamic Relations. Family members explained they take issue with the reporting party's story and the police response.

“In the statement, the reporting party was unable to identify when they saw the supposed weapon and admitted there was never an assault,” said Badrudin Aden, Isak’s brother.

After the press conference, CAIR and the family also shared 17 case file pages with the media. Some of those documents, however, had additional hand-drawn redactions compared to original copies released by Eagan and Bloomington police.

During the press conference, Aden’s brother highlighted the minutes before the officers fired shots, claiming Aden was unarmed.

“He was already sitting down on the ground with his hands on his face unarmed at 8:56 p.m,” said Badrudin Aden. “He was unarmed when they engaged him at 10:38 p.m. They isolated him mentally and emotionally tortured him and then essentially executed him.”

The report, however told a different story. FOX 9 learned the family had crossed out lines pertaining to Aden having a gun to his head, putting the gun down and then picking it up again. 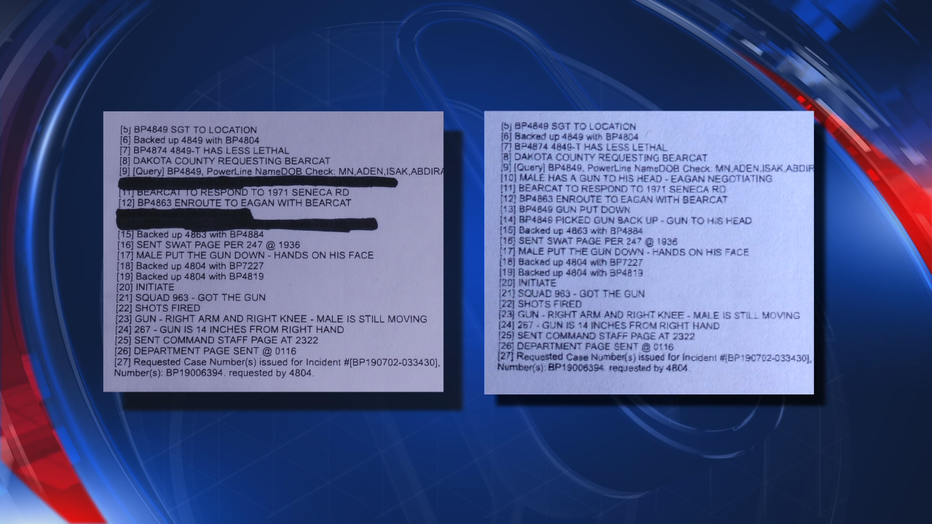 The Bloomington Police incident report presented by the family (left) compared to the original document (right) shows lines blacked out regarding when Isak Aden handled the gun. (FOX 9)

Among the additional redactions included a part which stated the reporting party said Aden believed that she had sent some nude photographs of him on the internet because he had received a call from an anonymous person. Also etched out was information stating Aden had been waiting for her in his vehicle. 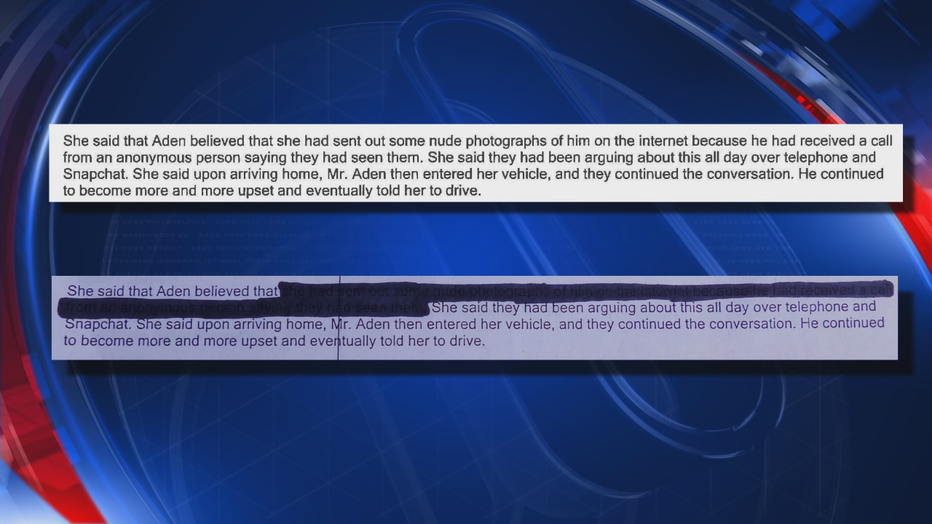 The original report (top) compared the report shared by CAIR-MN and the family show differences between what was released. (FOX 9)

“In these heightened times we want these departments to be transparent,” said CAIR-MN Executive Director Hussein, during the press conference.

FOX 9 asked Hussein why - while asking for transparency - they tried to black out additional information to the public. He said it was due to "sensitivity purposes for the family."

“We are still demanding justice and are looking for any and all options for justice for Isak,” said Sumaya Aden, Isak’s sister.

The Dakota County’s Attorney’s Office is now reviewing the case for possible charges. Among the evidence is hundreds of reports, statements and multiple videos. In a statement, Dakota County Attorney James Backstrom said it will take about three to four weeks to come to a decision.

CAIR-MN is also asking for Backstrom to be removed from the case, claiming a conflict of interest. In a statement, Backstrom said there is no conflict as the officers are involved are employed by Eagan and Bloomington, not Dakota County.

"We will review all of the evidence gathered in this investigation thoroughly, fairly and impartially, and make our decision as soon as possible," read Backstrom's statement.