Republican-endorsed candidate Jim Schultz is calling for more criminal prosecutions, longer prison sentences, and public shaming of prosecutors and judges who -- in his view -- go easy on people charged with crimes. Democratic incumbent Keith Ellison says the focus should be on strengthening Minnesota's gun laws.

Schultz rolled out a six-point public safety plan at the state Capitol this week. He said his first priority would be assigning at least 30 staff attorneys -- a 10-fold increase from the current level -- to help county attorneys with criminal cases. The attorneys would be shifted from business regulatory cases, Schultz said.

If attorneys refused to switch into the criminal division, Schultz said "they'll have to find a new job."

Ellison said three attorneys work full-time on criminal cases, an increase from a single attorney when he took office in 2019. Ellison has asked the Legislature for more funding to hire more attorneys, but Republican lawmakers have said Ellison's current budget is enough.

"We do as much as we can. I think I need nine more people," Ellison told reporters. "Now, the Legislature knows this. I don’t blame my opponent for not knowing because he’s never done criminal defense. He’s never done even a trial, never even stepped into court." 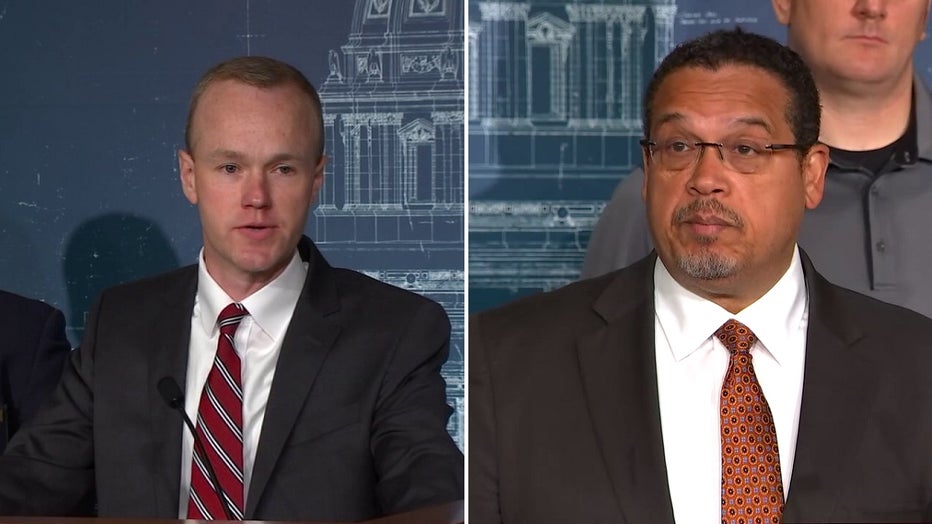 A spokesman for Ellison later said Schultz would struggle to shift enough attorneys to criminal cases while still upholding his duty to defend state laws related to consumer protection, utilities, and charitable gaming. The attorney general's office has 151 attorneys overall, down significantly from the 1990s, said John Stiles, the spokesman.

Ellison said tougher gun restrictions were his top public safety priority. Among the policies he supports: more stringent background checks, a ban on assault weapons sales, and regulating so-called "ghost guns" that are purchased and assembled from kits.

"You cannot have a serious conversation about public safety and exclude a dialogue about guns," he said after a roundtable discussion in Maplewood.

Schultz is not calling for tougher gun laws. Instead, he said the Legislature should create higher minimum sentences for carjacking offenses and increase penalties for repeat violent offenders.

Schultz said he was open to the Legislature expanding the attorney general's powers. In the meantime, Schultz said he would use his platform to criticize county attorneys whose prosecutorial decisions he disagrees with.

"They’re acting incredibly irresponsibly, getting behind these hyper woke policies that have led to dead kids in the streets, that have led to the incredible carjackings we have," he said. "They’re failing to protect Minnesotans and we need to be honest about that.""

If elected, Schultz said he would vote to reduce former Brooklyn Center police officer Kim Potter's sentence, which he said was too harsh.

Potter killed Daunte Wright when she fired her gun instead of her Taser during a 2021 traffic stop. A Hennepin County jury convicted her of first-degree manslaughter in December.

"By the time I take office, she will have served several months in prison. I think that’s more than adequate for the crime she committed," Schultz told reporters.

The attorney general sits on the three-member Board of Pardons. Republican governor candidate Dr. Scott Jensen, who would also have a seat on the pardon board, has told FOX 9 that he would take the same vote.

It's unknown what the third member, Minnesota Supreme Court Chief Justice Lorie Gildea, would do.

Ellison's office led the Potter prosecution. Through a spokesman, Ellison declined comment about how he'd vote on a potential case before the pardon board. He has previously defended his office's handling of the case.

Potter is serving 16 months in the state prison in Shakopee and is scheduled for release in April. That means she could be released before the first pardon board meeting of 2023, though she is due to remain on probation until December 2023.