Are EV batteries as green as they say? Yes and no

Eric Wachsman, professor at the University of Maryland and director of Maryland Energy Innovation Institute, weighs in on some of the reasons why some people are not totally behind electric vehicles.

With inflation driving gas prices to an all-time high, consumers are flocking to dealerships to get themselves an electric vehicle (EV).

The prices may not be as competitive as some of the vehicles running on an internal combustion engine, but it's the great long-term investment many are striving to achieve while, of course, minimizing their carbon footprint.

But are these cars — which manufacturers boast are better for the environment — as green as they seem?

One of the biggest issues that come up when comparing the environmental impacts of EVs versus internal combustion engine vehicles (ICEV) is the battery.

Experts have weighed in on the controversial manufacturing surrounding EV batteries and while many huge automakers such as Chevrolet and Ford are starting to pump out EV models, consumers are still left to wonder: Do the environmental impacts outweigh the potential long-term benefits of moving towards an EV-dominated world?

Let’s look at some of the myths surrounding EV batteries.

RELATED: EVs: Here's what you should know as interests in electric cars rise amid high gas prices across the U.S.

Myth: EV batteries are just as bad for the environment as gas cars

There isn’t really a clear-cut true-or-false narrative when it comes to answering this question.

Most of the current battery chemistry relies on lithium and cobalt. Lithium is commonly mined out of the earth in huge pits or extracted by pumping a brine solution into a bore hole and evaporating the solution in sprawling above-ground ponds. Neither option is environmentally friendly.

Such lithium mining projects represent a challenge for environmentalists because they carry the promise of decarbonization in exchange for heavy impacts on ecosystems and local communities. 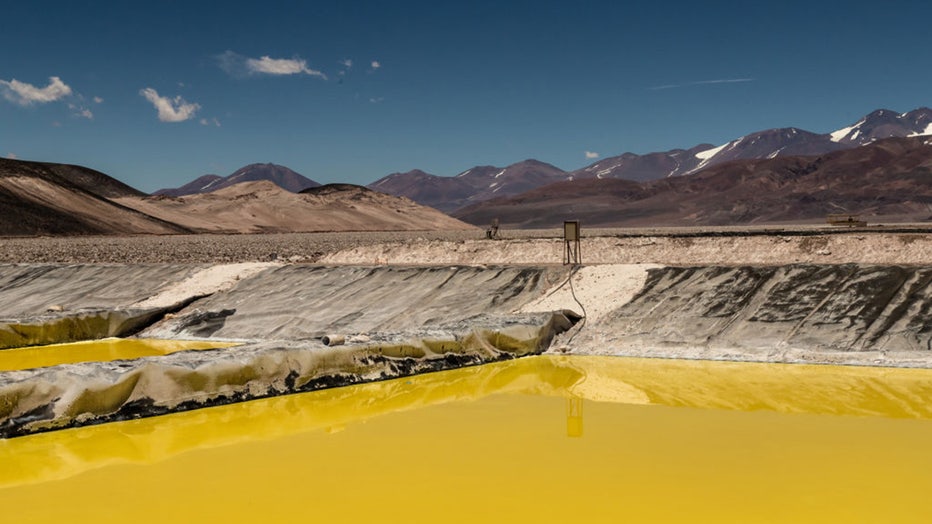 The big challenge is making sure lithium mines are located in places where they do the least amount of damage, said Lisa Belenky, senior attorney for the Center for Biological Diversity.

"It really is very site specific as far as what impacts it would have to the local species, water," Belenky said. "Almost every energy project we look at for climate change has its own greenhouse gas footprint."

Cobalt is also an essential element in the rechargeable lithium batteries that fuel many electronic devices. The rise of smartphones in the past 20 years has created a large demand for the metal, and the growing popularity of electric cars is expected to further increase demand.

And just like with lithium or any mineral mining, cobalt is also not the most environmentally friendly. Mining creates waste that could potentially pollute local water supply, the air, the soil and the health of workers.

Regardless, the demand for the minerals remains. The World Bank estimates that the production of battery minerals, including graphite, nickel and cobalt, could increase by 500% by 2050. 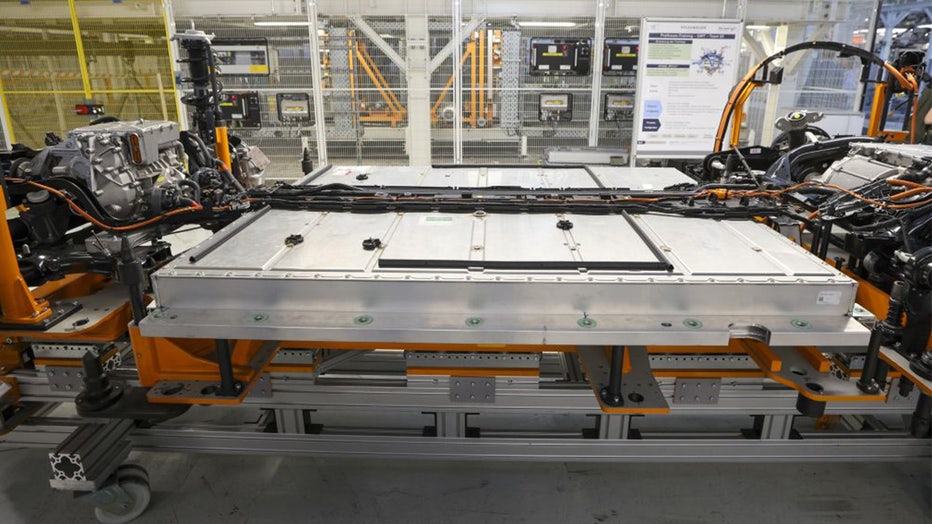 FILE - The battery pack of a Volkswagen ID Buzz electric microbus on the assembly line during a media tour of the Volkswagen AG multipurpose and commercial vehicle plant in Hannover, Germany, on Thursday, June 16, 2022.  (Alex Kraus/Bloomberg via Getty Images)

But, like in any economy, when there is demand, there is innovation.

The ethical and environmental issues surrounding elements such as cobalt and lithium will be a thing of the past as the world moves towards a greener world, according to Eric Wachsman, professor at the University of Maryland and director of Maryland Energy Innovation Institute.

"Everybody agrees, that’s not the best," Wachsman said of how the essential elements needed in an EV battery are acquired.

"So you might have heard there was a Nobel Prize in 2019, John Goodenough and Stan Woodingham and Akira (Yoshino), these are the guys who invented the lithium-ion battery. They were using lithium cobalt oxide. That was sort of the first cathode material that was known; it was invented by John Goodenough," Wachsman explained. "That was in Sony Handycams, remember those things? And the first cell phones. Those are being replaced now by a nickel-manganese cobalt, so NMC — less cobalt. And they keep changing the chemistry to go less and less cobalt. And now the nickel is starting to become an issue not because of the mining issue, like cobalt, but just the availability."

Wachsman pointed out several different battery chemistries that are being studied to open the door for more ethically-made and clean EV batteries to be mass-produced. But this isn’t like the field of dreams where if you make it, they will come.

There needs to be a demand for the product to justify investing time and money into figuring out better options for manufacturers.

Some of the types of battery chemistries being looked into are:

"There are other chemistries out there. Lithium-sulfur is one out there. Sulfur is sort of a byproduct of hydrocarbon processing. It’s basically something people almost give away to get rid of, so those chemistries are coming along and they’re going to replace the current cobalt and that will disappear as an issue," Wachsman continued.

RELATED: What is net-zero living and why experts say it’s worth it

Actually, you can, but again, there isn’t a huge market for recycling these types of batteries — yet.

"There is a second life for batteries. There’s not a second life for your gas engine. I mean, when it dies, it’s dead. It’s basically just a boat anchor, you’ve got to pay to have it disposed of someplace," Wachsman explained.

He also noted that his home is powered by solar panels and, hypothetically, if he absolutely needed to, he could repurpose his electric vehicle battery to power his entire home.

A typical home with solar panels on the roof tends to have a 10-kW battery that powers them, according to Wachsman. "Your Tesla has a 100-kW battery in it, so it could power my entire house," Wachsman posited.

There are several projects underway to make battery recycling more affordable, and it’s very likely that the company that pioneers the technology will reap huge rewards. In the event that lithium becomes scarce, that threshold for economic feasibility will also drop, according to The Associated Press.

Giant automakers such as Toyota and Ford have recently partnered with Redwood Materials Inc., a startup whose goal is to create an EV battery recycling system aimed at lowering the cost of electric vehicles overall and reducing the environmental impacts, according to Reuters. 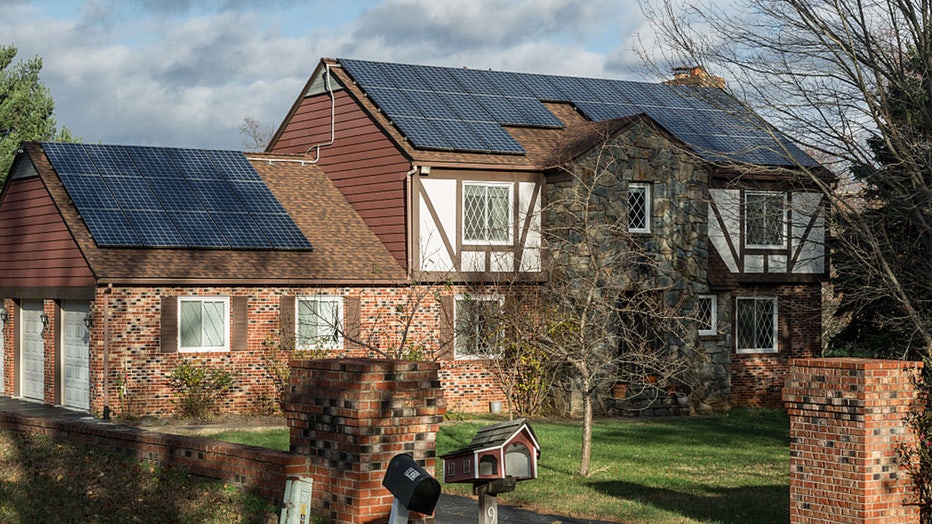 FILE - Solar panels on the roof of a house in Beaufort Park on Nov. 20, 2016, in Maryland. (Benjamin C. Tankersley/For The Washington Post via Getty Images)

Myth: Charging is a pain because there aren’t enough stations

Many long-range drivers agree, this is true right now. But as with anything that is mass-produced, if there is a demand, companies will make more.

With some of the world’s top automakers jumping on the EV bandwagon — Honda, Toyota, Cadillac, Ford, Chrysler, the list goes on — the U.S. Environment Protection Agency says charging stations will crop up and add to the already 45,000 existing charging stations in the U.S. today.

With the development of direct-current fast charging, many new EVs can replenish 200-plus miles of range in only 20 minutes. The hidden component to worry about is where that energy comes from. More than 60% of electricity in the U.S. is still generated using fossil fuels. But the share of renewable energy has doubled since the 1980s, and trends suggest that the pace will accelerate.

With the expected increase in EV sales, power consumption will understandably increase as well, straining an aging power grid. In energy-challenged California, that could spell disaster during summer months when rolling blackouts are already common. For now, it seems that solar on every roof may be the most viable solution, according to the car-buying experts at Edmunds.

Going green on the federal level 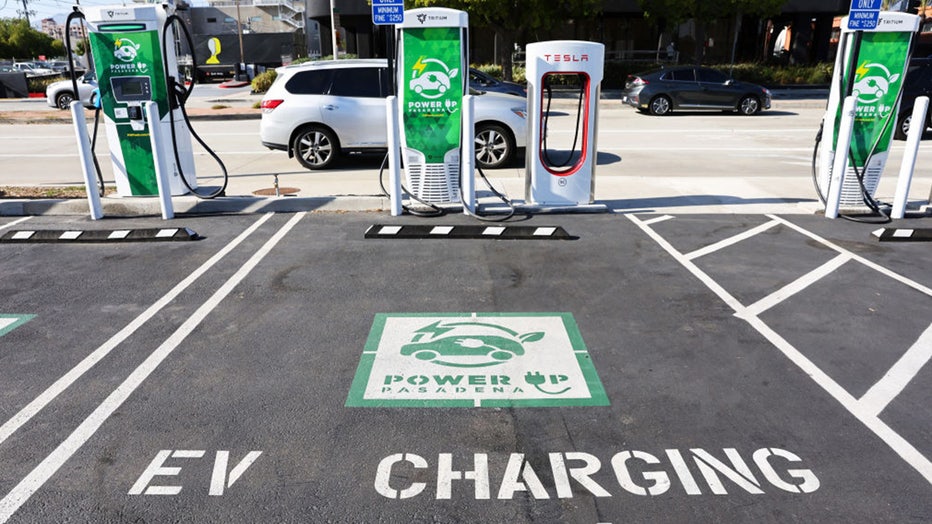 FILE - An 'EV Charging Only' sign is seen at a Power Up fast charger station for electric vehicles on April 14, 2022, in Pasadena, Calif. (Mario Tama/Getty Images)

Earlier this year, the Biden administration announced the availability of $5 billion in federal money to states over five years under President Joe Biden’s infrastructure law, sketching out a vision of seamless climate-friendly car travel from coast to coast.

Under Transportation Department requirements, states must submit plans to the federal government and can begin construction by this fall if they focus first on highway routes, rather than neighborhoods and shopping centers, that can allow people to take their electric vehicles long distances.

Currently, electric vehicle owners charge their vehicles at home 80% of the time, making the need for EV charging stations at colleges, apartment building parking lots or even public streets less urgent. But that is likely to change as more people who don’t have a garage to house a charging station buy EVs.

Direct-current fast chargers, which can charge a car up to 80% of its battery capacity in 20 to 45 minutes, are quite expensive, costing $40,000 to $100,000, limiting the number that can be built, but they enable drivers to quickly get back on a road such as a highway.

Jessika Trancik, a professor at the Massachusetts Institute of Technology who studies EV charging, called the administration’s approach a good first step. She said a successful strategy to spur wider EV use will require charging stations in a host of different locations, including faster charging along highways and slower charging near homes and workplaces.

Even with limited resources, she said, federal money could be distributed to accelerate private investment, with greater government incentives for areas that might otherwise be underserved by the private sector.

"It’s not about government going out and installing every one of these chargers themselves," she said. "It’s also about nudging private sector investment."

The Associated Press contributed to this report. This story was reported out of Los Angeles.