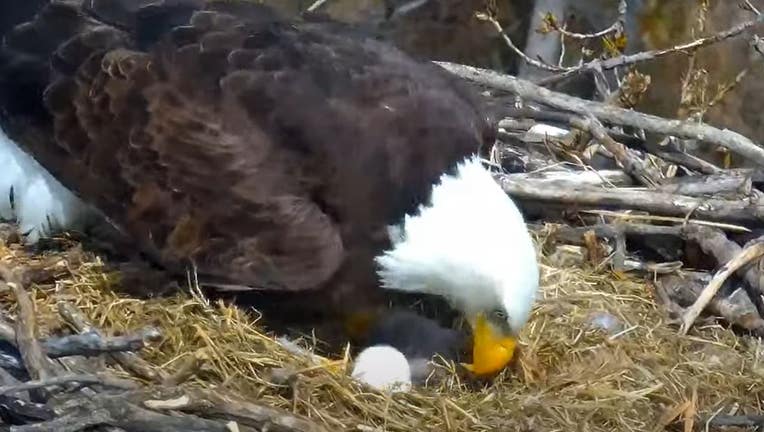 A eaglet was a captured on the Minnesota DNR EagleCam. (Minnesota Department of Natural Resources)

(FOX 9) - One of the eaglets on the Minnesota Department of Natural Resources EagleCam has hatched.

Around 2:24 p.m. on the EagleCam, a small gray tuft of feathers could be seen underneath the bald eagle as it rearranged itself on the nest. If you listen closely on live EagleCam, you may even hear a few peeps from the chick.

On Thursday, the DNR saw the first pip, or hole, appear on one of the eggs. Officials even spotted part of the hatchling's beak as it poked through the pip. This meant the baby would likely hatch within 24 hours.

The first egg was laid on March 22 and the second egg, which appears it has yet to hatch, came five days later. However the time between the laying of the two eggs means the second eaglet faces an uphill battle for survival. This chick will likely be smaller and may get beaten up or even killed by its sibling, according to the DNR.

In the coming weeks, the parents will feed their young eaglets, likely starting with fish.