Driving in the ‘Salt Belt’: Millions of cars with rust recalls

Daniel Savage wanted a safe ‘second car’ for perilous Minnesota winter driving, so a couple years ago he bought a used 2008 Subaru Forester.

(FOX 9) - Daniel Savage wanted a safe ‘second car’ for perilous Minnesota winter driving, so a couple of years ago he bought a used 2008 Subaru Forester.

On June 16, as he was getting on Highway 610 in Brooklyn Park -- with clear skies and a dry road ahead-- his car suddenly, and without warning, seemed possessed.

"The car just started shaking violently, I lost steering," Savage said. "I was just thinking, I have to get this car off the road or I’m going to get hit."

An amateur car buff, Savage was shocked by what he found underneath his Subaru Forester.

The control arm, which holds the wheels straight, had inexplicably snapped off from the frame of his car.

"This part was completely rusted out from the inside out," Savage said as he showed the FOX 9 Investigators the broken part of the car still sitting in his driveway.

He soon discovered his wasn’t the only one with this problem. 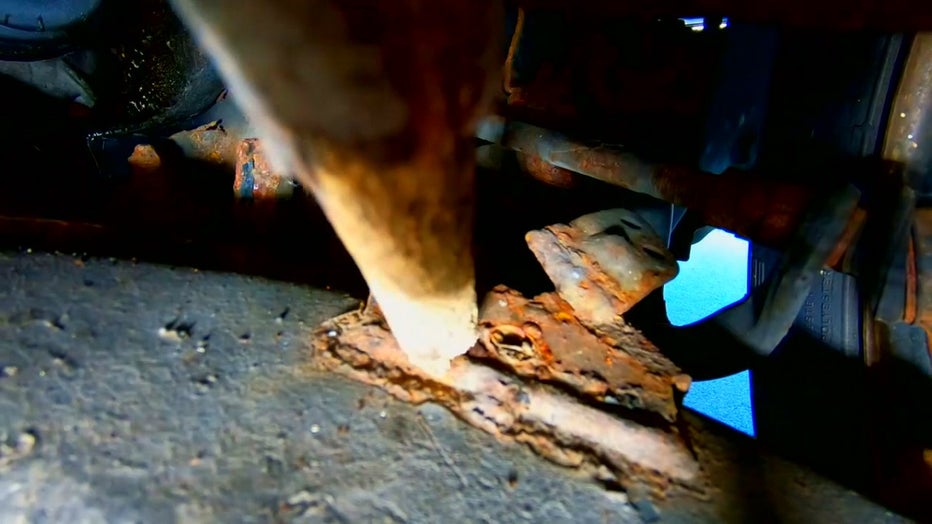 The same thing happened to Lydia Radcliffe on July 8 while driving her 2005 Subaru Forester on a busy county road near Stoughton, Wisconsin.  The only warning she heard was the sound of a "clunk."

"And at that split second, I realized I had no steering.  Nothing was working at all," Radcliffe said.

Next thing she knew her car was 80 feet into a cornfield, barely missing a telephone pole and a culvert.

"It was horrifying. I’ve never heard of anything happening like that before to anybody else," she said.

On Subaru message boards you can find drivers and owners complaining about the same problem:  a catastrophic failure of the control arm from rust and corrosion.

There was a message from a Canadian family who said they "were lucky" because they "could be in the obituaries" after their car crashed into a guardrail.

Savage ran his vehicle's VIN number through an NHTSA database, and found there was, in fact, a recall for his Subaru Forester.

The defect, according to NHTSA and Subaru, was a bracket holding the control arm was breaking, because a drain hole would clog, causing corrosion from the inside.

But the recall was for only vehicles registered in twenty so-called "salt belt" states, including Minnesota, where salt and corrosive chemicals are used on roads in the winter. 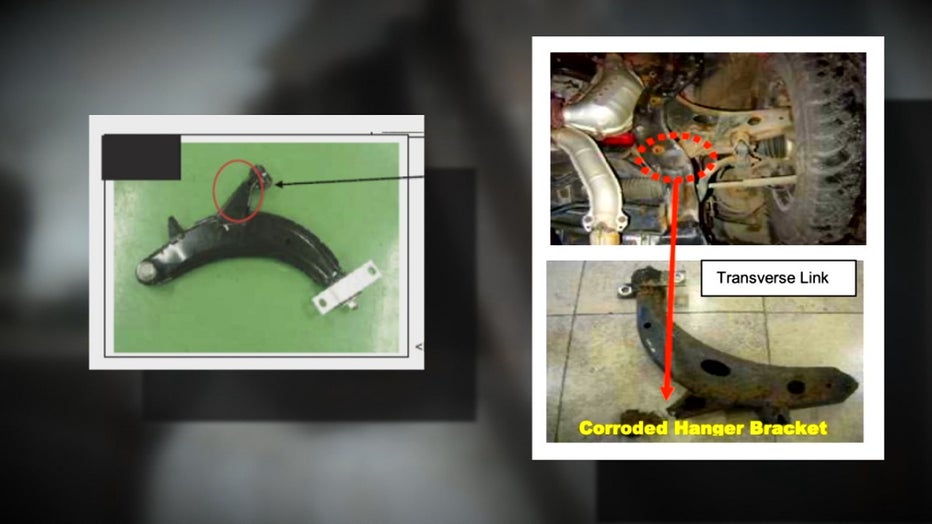 Savage ran his vehicle’s VIN number through a Subaru website and found the recall on his vehicle had been completed.

Come to find out, the vehicle's previous owner did get a recall notice from Subaru, instructing them to go to their nearest dealer for repairs.

But dealerships were given a choice: Replace the control arm for $300 if the part’s integrity had been compromised by corrosion, or, if the part appeared to be in good condition, simply spraying it with an anti-rust treatment.

Savage said his car got the anti-rust spray, not a new part.

The spray was cheaper, quicker, option, to be sure, Savage figured.  But he wondered if it was safer. Remember, this part was rusting from the inside.

Savage filed a complaint with NHTSA claiming Subaru of America "did the recall on the cheap," and NHTSA permitted it.

"They basically masked the rust problem, and allowed it to continue rusting," Savage said.

Radcliffe, who experienced the failure in Wisconsin, said Subaru confirmed the Forester she bought last year had also completed the recall with the anti-rust spray.

She also filed a complaint with NHTSA, telling them, "I don’t want anyone to lose their life over this part malfunction."

Other Recalls in 'Salt Belt'

The FOX 9 Investigators learned critical safety recalls for rust and corrosion are not unusual, and not limited to a particular manufacturer or model of vehicle.

It also appears to be a growing problem as more people buy previously owned vehicles.  Because of the pandemic and supply chain difficulties, the average age of American vehicles hit a record 12 years in 2020, an increase of two months over 2019, according to data from HIS Markit.

General Motors, Mitsubishi, Honda, and Toyota have all had recent safety recalls for rust and corrosion on the chassis, frame, and undercarriage of vehicles.  Altogether the recalls affect nearly a million vehicles, but all the recalls are limited to vehicles registered in ‘salt belt’ states.

All the warnings and recalls are restricted to the ‘salt belt’ states.

But what if the used vehicle was purchased out of state?

Jim Choate, an auto body instructor with Hennepin Tech College, said "rust is like a cancer."

"You’re guessing at the damage. You see a quarter size of rust, and you don’t know that it’s not hiding something that’s melon size," Choate said.

Unseen and untreated it can spread to devastating effect, potentially leading to a catastrophic failure at high speeds, he said.

"You can have just about anything happen.  Look at this Ford the whole undercarriage is gone," Choate said, pointing to a car on a lift.

"The control arm is so bad, solid rust," he said.

Choate said used car buyers cannot assume a recall has been taken care of and should check their vehicle's VIN number with the manufacturer or dealer.

But there are also a couple of ways to prevent rust and corrosion before it begins.

Washing your car isn’t just aesthetics, it is also a safety issue.

NHTSA recommends car owners in salt belt states should wash the underside of their vehicle several times during winter.

Choate recommends washing your vehicle as often as once a week, weather permitting.  He is also cautious about automated car washes that may not clean the underside of the vehicle.

It is also why owners should seriously consider extra undercoating that can protect your vehicle.

But experts warn against undercoating a car without cleaning off the rust first, trapping it underneath, allowing oxidation to continue.

Savage believes that’s what happened with his Subaru Forester.  The anti-rust treatment simply trapped the corrosion already spreading underneath his vehicle.

"Out of sight, out of mind," Savage said.  "Kick the can down the road and maybe you’ll come back and pay us to replace it in the future."

Subaru USA did not reply to repeated requests for comment.  NHTSA also did not respond to questions.