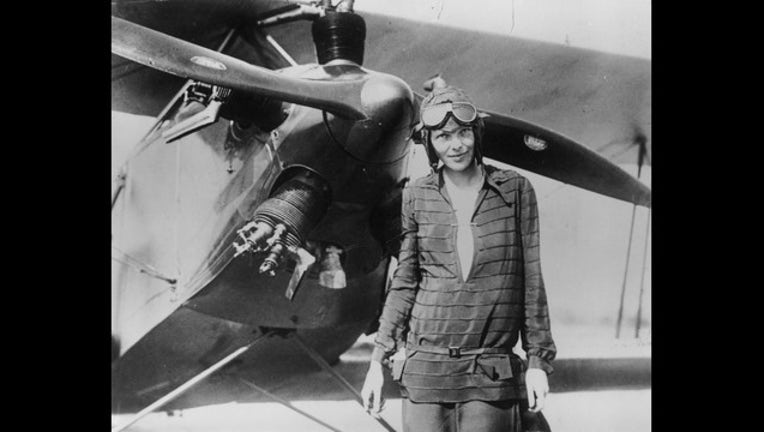 Amelia Earhart stands June 14, 1928 in front of her bi-plane called "Friendship" in Newfoundland. Earhart (1898 - 1937) disappeared without trace over the Pacific Ocean in her attempt to fly around the world in 1937. (Photo by Getty Images)

NEW YORK (AP) -- The photo is haunting. Among a number of figures gathered on a dock, the fuzzy image seems to be that of a woman, her back to the camera, gazing at what may be her crippled aircraft loaded on a barge, and perhaps wondering what her future might hold.

The photo can be found here, along with more information on the upcoming documentary.

Is this Amelia Earhart, the world-famous aviator, witnessed after her mysterious disappearance while attempting the first round-the-world flight 80 years ago this month?

That is the theory put forth in "Amelia Earhart: The Lost Evidence," a two-hour documentary airing Sunday at 9 p.m. EDT on the History channel. It uncovers records, including this newly revealed photograph that shows what may be a healthy Earhart along with her navigator Fred Noonan, after they were last heard from.

The film also argues that after the pair crash-landed in the Japanese-held Marshall Islands, they were picked up by the Japanese military and that Earhart, perhaps presumed to be a U.S. spy, was held prisoner.

And there's more: The United States government knew of her whereabouts and did nothing to rescue her, according to the film.

The disappearance of Earhart and Noonan on July 2, 1937, in the Western Pacific Ocean has gained legendary status among the age's unsolved mysteries.

By then she had already logged numerous aviation feats, including that of being the first woman to fly solo across the Atlantic Ocean in 1932. She reigned as an international hero.

And yet the U.S. government closed the book on its investigation just two weeks after her disappearance. Its vaguely worded findings were inconclusive.

Was there a cover-up? The film proposes there was.

The documentary is hosted by former FBI Executive Assistant Director Shawn Henry, whose fascination with the case is equaled by former U.S. Treasury Agent Les Kinney, who discovered the photo hidden and mislabeled in the U.S. National Archives.

In the documentary, that photo is subjected to facial-recognition and other forensic testing. It is judged authentic, and likely that of Earhart and Noonan.

The film also displays plane parts found in an uninhabited island of the Marshall Islands by Earhart investigator Dick Spink that are consistent with the aircraft that Earhart was flying on her round-the-world attempt. And it hears from the last living eyewitness who claims to have seen Earhart and Noonan after their crash.

The documentary tells of "a world-famous aviator who got caught up in an international dispute, was abandoned by her own government, and made the ultimate sacrifice," Henry sums up. "She may very well be the first casualty of World War II."

Link to the photo and documentary information: http://www.history.com/news/does-this-photo-show-amelia-earhart-after-her-plane-disappeared