Minnesota Senator Omar Fateh is facing questions from colleagues and constituents, including an ethics complaint seeking an investigation into ties to alleged federal voter fraud.

The Senate's ethics panel is considering whether to pursue an investigation of Fateh over two Republican complaints. The committee discussed one complaint, which accuses Fateh of seeking state grant money for a Somali media outlet that ran free ads for him in 2020, on Wednesday. Senators plan to return next week to take up the separate matter of Fateh's ties to a federal voter fraud case.

Fateh, a first-term lawmaker from Minneapolis, refuted allegations of a conflict of interest in the first complaint. The issue stems from ads that ran on Somali TV during his DFL primary upset of then-state Sen. Jeff Hayden. The ads carried no disclaimer that Fateh paid for them, and neither did his campaign finance reports - until Fateh changed them on Tuesday.

Fateh and his attorney held up screenshots from Cash App, a mobile payment service, showing two $500 payments to Somali TV's president for ads. They also brought a sworn statement from the YouTube outlet's president saying he forgot to include Fateh's disclaimer.

"The allegations before the subcommittee today are fundamentally based in rumor," said Kristin Hendrick, Fateh's lawyer. "There is no indication of a conflict of interest here. This was a paid advertisement."

Hendrick said Fateh's actions were "an error," but did not represent "reckless disregard" for Senate rules.

Republicans pressed for an investigation, saying they had established probable cause against Fateh. 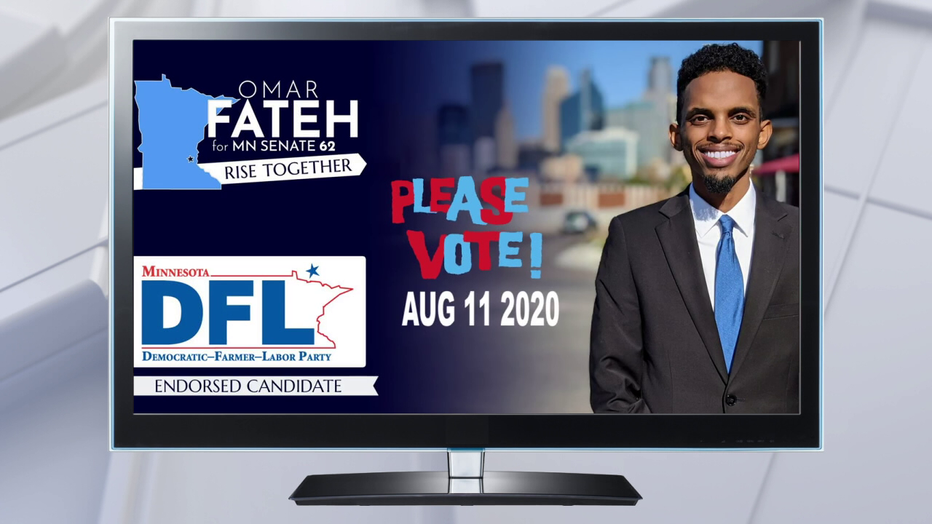 An ad ran by Sen. Omar Fateh during the 2020 election cycle.

"I would argue that none of the information they’ve provided disproves our claims," said state Sen. Mark Koran, R-North Branch, who presented the GOP's case. "The totality of (Fateh's actions) says, it appears that somebody was trying to violate – or not comply – with a pretty simple campaign finance process."

The four-member panel has two senators from each party. The panel's Republican members peppered Fateh with questions, while one DFL senator said she believed her fellow lawmaker's evidence.

"He’s my colleague. I have no reason to believe that’s not true," said state Sen. Patricia Torres Ray, DFL-Minneapolis.

Marc Kimball, a spokesman for Senate Democrats, said Fateh remains a member of the caucus. The Senate DFL did not pay for Fateh's lawyer, Kimball said.

The ethics committee did not take a vote after its two-hour hearing, instead scheduling another meeting for next Wednesday. At that hearing, it will consider Fateh's ties to a federal voter fraud case in which the senator's brother-in-law was convicted in May of lying to a grand jury.

In the fallout from that case, Fateh's legislative aide left his Senate job on May 27.

Fateh used an alternate door to leave the hearing room while reporters waited in the hallway. Hendrick declined to answer FOX 9's question if Fateh had fired his aide in connection with the case.

"I have no comment on anything else today," she said. "Today for the hearing we did go over complaint number one. I mean, I've already given my comment on that."