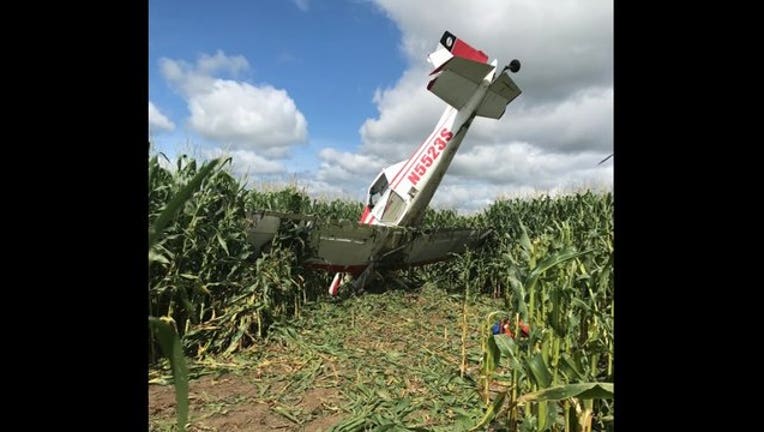 LUXEMBURG TOWNSHIP, Minn. (KMSP) - A crop dusting plane crashed Thursday morning just north of Watkins, Minnesota after the plane’s engine stalled while preparing to make a pass on a field.

The incident occurred at 10:40 a.m. after a reporting party indicated they could see the tail of the aircraft sticking out of the standing corn. The plane was found near County Road 2 in Luxemburg Township.

Responders discovered the pilot, Jonathan Aslesen, 21, of Buffalo on the scene. He was uninjured and denied medical treatment.

Aslesen said he experienced a mechanical problem with the engine, which stalled while he was preparing to crop dust the field.

He was forced to do an emergency landing in the cornfield.

The aircraft sustained “light damage” according to the Stearns County Sheriff’s Office. The plane came to rest on the nose of the aircraft.

The standing corn in the field, owned by Westlund Dairy, sustained some damage, too. The aircraft was owned by Classic Arrow, Inc., a Buffalo company that does crop dusting in central Minnesota.

The Stearns County Sheriff’s Office and the Federal Aviation Administration are investigating the incident.