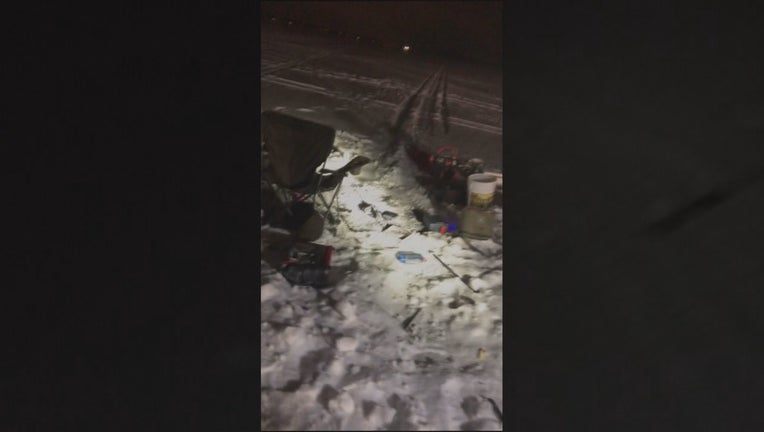 Peter Kissinger shot video of the remains of his fish house after a snowmobile drove through it on Lake Minnetonka. (Peter Kissinger)

WAYZATA, Minn. (FOX 9) - A snowmobile crashed through a couple’s ice fishing house over the weekend on Lake Minnetonka. As authorities look for the culprit, the ice anglers have a word of warning for others out on the lakes.

Peter Kissinger enjoys ice fishing once or twice a week, but when his girlfriend Samantha Hoch joined him for only her second time last week, they had a close call that has them both still reeling.

A snowmobile crashed through a couple’s ice fishing house over the weekend on Lake Minnetonka. As authorities look for the culprit, the ice anglers have a word of warning for others out on the lakes. &nbsp;

"It's still shocking," said Kissinger. "We just keep thinking about it and how lucky we were."

Kissinger had just set up his portable fish house on Wayzata Bay around 6 p.m. Friday night. Hoch was sitting in a chair inside while Kissinger went outside to set up a portable fishing pole. He then saw a pair of snowmobiles in the distance speeding right towards them and knew something was wrong.

"I screamed and waved my hands and started running that way," said Kissinger. "The next moment the house was gone. The snowmobile had just smashed right into it."

Kissinger shot video of the aftermath. The fish house was thrown 20 to 30 feet after being hit by one of the snowmobiles and everything inside was scattered across the frozen lake.

Hoch suffered a bruise on her right foot, shin and ankle, but incredibly she was otherwise unharmed.

"I just felt it come into the house and it’s not a very big house and it was just like a flash and I just saw the whole thing go up and over my head," said Hoch.

The couple says both snowmobile drivers stopped about 100 yards away, but never checked to see if they were okay. The snowmobilers took off before the water patrol arrived.

Now, Kissinger and Hoch hope investigators find them because the accident could have been much worse.

"This is a very unlikely scenario, but obviously it can happen, so we're just telling everyone to be as safe as possible," said Hoch.

The couple didn't get a good look at the snowmobiles because it was dark, but investigators believe they are looking for someone who drives a newer model Skidoo snowmobile. Anyone with information is asked to call the Hennepin County Water Patrol.