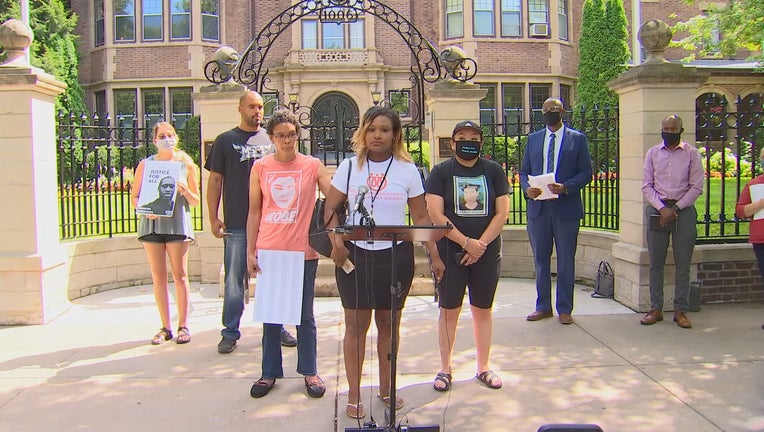 Community members and activists gathered outside the Governor's Residence in St. Paul to hold a press conference in response to the police accountability bill passed early Tuesday morning. (FOX 9)

“It’s a sad day for me as a community leader to see that the state that killed George Floyd does not want and is not interested in Black lives,” said Jaylani Hussein, the Minnesota executive director of the Council on American-Islamic Relations.

While they got a few things they asked for, they are disappointed that the majority of the bills they proposed didn’t make the cut including a ban on no-knock warrants and a requirement that officers carry personal liability insurance.

Minneapolis Mayor Jacob Frey expressed his own disappointment as he was hoping to see significant arbitration reform.

“We can terminate [officers], but then there’s another group of people who can send them right back to the department and it happens almost 50 percent of the time,” said Frey. “We can’t see a full culture shift until we are able to have termination decisions that the chief and I can make stick.”

His criticism of the legislation prompted some from his own party to call him out.

Representative Hodan Hassan (D-Minneapolis) tweeted, “You would think Mpls mayor would respect the work that 14-legislators of Black, Indigenous, and People of Color have been doing in the last 8 weeks. I guess not! Thanks Jacob Frey for displaying classic act of white privilege. I am just sick and tired.”

House Majority Leader Ryan Winkler tweeted, “Cities manage their police departments, bargain contracts and impose discipline. The labor arbitration process, especially as we improved it for police accountability, cannot make up for poor management decisions. City leaders need to do their part, too.”

Frey said he does respect the work it took to compromise in a divided legislature, especially the work done by the People of Color and Indigenous Caucus, but he says changes to the arbitration process must come from the state.

“We want to act,” said Frey. “We’re saying, give us the ability to act and have that decision stick.”