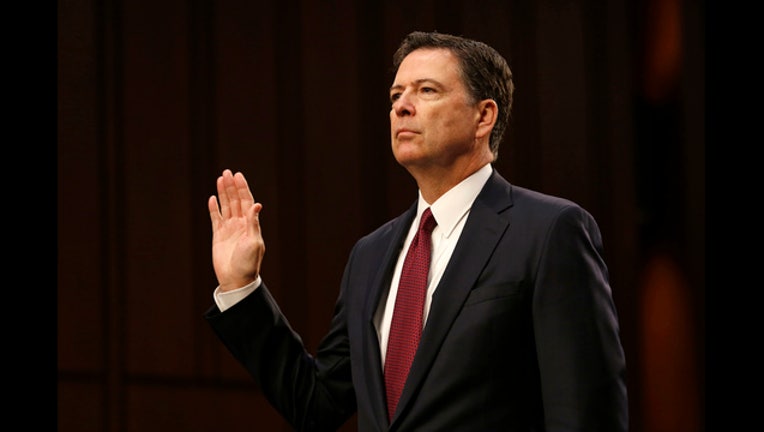 WASHINGTON (AP) -- Testifying under oath in a Senate hearing watched worldwide, former FBI Director James Comey accused the Trump administration Thursday of defaming him and the FBI in the aftermath of his abrupt firing by President Donald Trump. WATCH LIVE VIDEO AT FOX9.COM/LIVE OR ON FACEBOOK

"Those were lies, plain and simple," Comey said of the administration's claims that the FBI was poorly led and in disarray under his leadership, and that agents had lost confidence in him.

"The administration chose to defame me and more importantly the FBI," he said.

He also said he was "confused and increasingly concerned" by Trump's shifting explanations for firing him, including Trump's remark that he had had Russia on his mind in dismissing Comey four years into a 10-year term.

"He had repeatedly told me I was doing a great job and he hoped I would stay," Comey said. "So it confused me when I saw on television the president told me that he actually fired me because of the Russia investigation."

And Comey told senators why he had decided he must document every meeting he had with Trump, with a written record.

"I was honestly concerned that he might lie about the nature of our meeting, so I thought it really important to document," Comey said. "I knew there might come a day when I might need a record of what happened not only to defend myself but to protect the FBI."

Comey made his comments as the packed hearing got underway, bringing Washington and parts of the country to a halt as all eyes were glued on the hearing room. He immediately dove into the heart of the fraught political controversy around his firing as he elaborated on written testimony delivered Wednesday. In that testimony he had already disclosed that Trump demanded his "loyalty" and directly pushed him to "lift the cloud" of investigation by declaring publicly the president was not the target of the probe into his campaign's Russia ties.

Comey also testified in his written testimony that Trump, in a strange private encounter near the grandfather clock in the Oval Office, pushed him to end his investigation into former National Security Adviser Michael Flynn.

Trump was expected to dispute Comey's claims that he demanded loyalty and asked the FBI director to drop an investigation into former National Security Adviser Michael Flynn, according to a person close to the president's legal team who demanded anonymity because they were not authorized to discuss legal strategy. The Republican National Committee worked aggressively to discredit Comey ahead of the hearing and as it unfolded.

"Today," Burr told Comey, "is your opportunity to set the record straight."

Burr is leading the committee's investigation into Russia's meddling in the 2016 election and ties with Trump's own campaign team.

"We will establish the facts separate from rampant speculation and lay them out for the American people to make their own judgement," Burr said. "Only then will we be able to move forward and put this issue to rest."