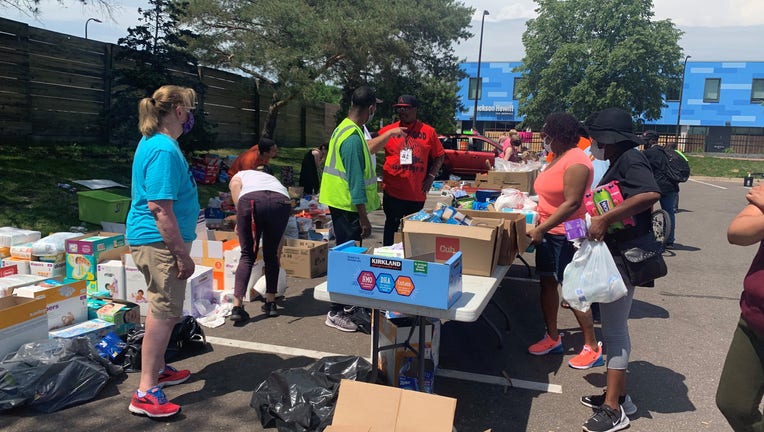 MINNEAPOLIS (FOX 9) - With grocery stores closed down around the Twin Cities metro area, people there don’t have a place to get their food.

So, nonprofits are teaming up and working together to hand out fresh produce and essential items to those who need it.

With grocery stores closed down around the Twin Cities metro area, people there don’t have a place to get their food. Now, nonprofits are teaming up to meet the need.

“It’s kinda hard since the stores been closed there’s a lot of people struggling,” said Mary Watley, who was picking up food.

When the neighborhood is boarded up, residents don’t have many options to get what they need.

“For the neighborhood, it’s been very hard all the stuff that’s been going on, breaking into stores, and all that stuff that was uncalled for. It was really uncalled for because it’s making it hard for people,” said Watley.

To fill that void, others have stepped in.

“We don’t tear down, we build up,” said KG Wilson, a community peace activist. “So, yes, I’m crushed behind what I have seen happen and if you look around us, what we’re trying to do today is trying to make sure the people have food and different hygiene and Pampers and stuff for their homes.”

Community activists and nonprofits have set up shop in the Cub Foods parking lot on the north side of Minneapolis to serve up to 300 families each day over the past week.

Tuesday, a huge refrigerated truck filled with 18 tons of fresh produce from Chicago was brought in by a Muslim charity group who saw people in need.

“We are hoping we can contribute a little bit,” said Halil Demir, of the Zakat Foundation. “Little bit to heal our nation and bring love.”

The fresh produce is available at the West Broadway Cub Foods and is being delivered in separate trucks to neighborhoods in need. It will feed about 1,500 families during the crisis.

“I’m grateful for people like this doing this for us,” said Watley. “It’s good.”

The nonprofits that are out in north Minneapolis will be there every day, Monday through Friday, from noon to 4 p.m. The next major shipment of food like Tuesday’s is expected Friday.