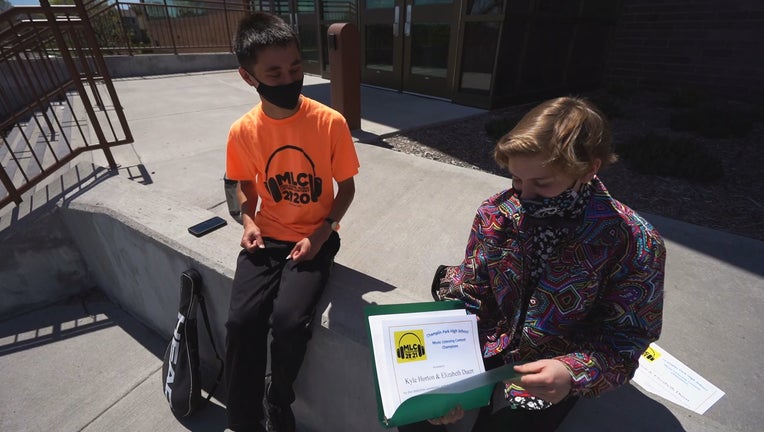 The Minnesota High School Listening Competition was established in 1988 and the competition itself often includes teams from other states like Utah and Iowa. It’s a unique competition where teams of three - or in 2021, teams of three or fewer - are asked to identify excerpts of music from a study guide of nearly 50 pieces of music spanning hundreds of years. Participants are also quizzed on information surrounding that piece, like what year the composer was born and other random facts.

Two seniors from Champlin Park High School won a competition that tested their knowledge of music pieces spanning hundreds of years and genres.

"You know each of their hometowns, which instruments they played, what schools they went to, degrees they got," Champlin Park High School senior Elizabeth Duerr said. "They occasionally throw in random facts about composers."

For example, who they were married to or what programs they founded at specific universities.

"I’m interested in history. I like history in general and when you add in music, it’s cool," Champlin Park High School Senior Kyle Horton said.

Horton and Duerr studied for weeks before the contest. They went through five rounds of competition.

In the first, they were asked to listen an excerpt from one of the nearly 50 pieces they studied. In the second round, they listened to excerpts and answered free response or multiple choice questions about what they heard. For the third round, they listened to a few seconds of an excerpt, one right after another, and were asked to identify the piece. In the fourth round, Duerr said they were asked riddles or given a "puzzle" asking them trivia questions about what they had studied. For the fifth round, they were presented with music not a part of their study guide, and, using their knowledge of musical theory, had to identify certain components of the piece.

"I was shocked, astonished," Horton said.

As they both prepare to graduate high school, during a year where many other activities were canceled, they say they’re glad they could leave on a high note.

"I think it’s really good to have something to look back on," Horton said.