Women’s History Month will be celebrated throughout the month of March in the U.S., a time to honor the vital role of women in American history and notable achievements across many different fields.

Its origins as a national celebration began in 1981, which Congress passed legislation authorizing and requesting the president to proclaim the week beginning March 7, 1982 as "Women’s History Week," according to the Library of Congress.

"These proclamations celebrate the contributions women have made to the United States and recognize the specific achievements women have made over the course of American history in a variety of fields," the Library of Congress explains.

In honor of the special month, here are some free and on-demand films and documentaries to watch on Tubi. They range from profiles of empowering female icons to in-depth documentaries about women's issues across the world. 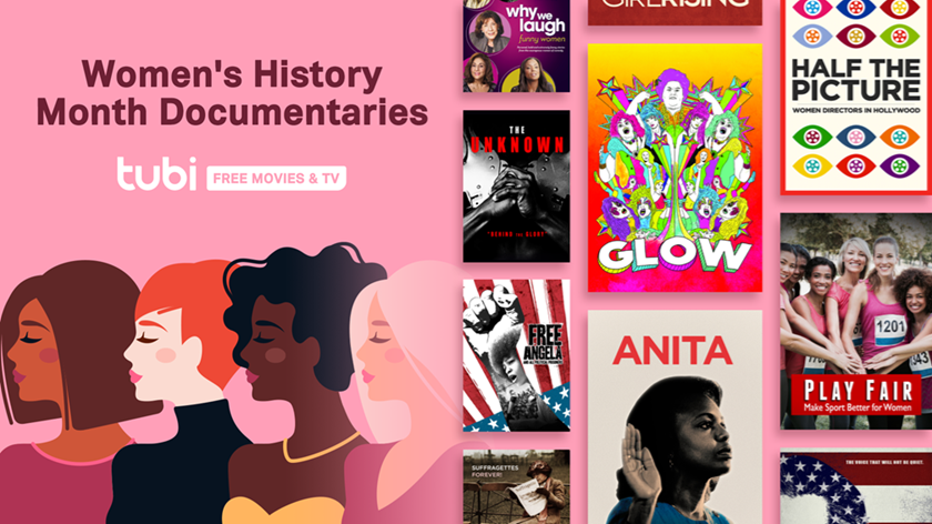 In honor of Women’s History Month during the month of March, there are several female-centric documentaries available for free on Tubi. “GLOW: The Story of the Gorgeous Ladies of Wrestling” chronicles the rise and fall of the first-ever, all-female p

Tubi features hundreds of free TV and movies to choose from, so grab the remote and start exploring several of these female-centric titles:

Grace of Monaco (2014) - Nicole Kidman, Tim Roth, Paz Vega
"Nicole Kidman is Grace Kelly, who faces difficulties in deciding if she should return to Hollywood despite the political disputes it creates."

Labor Pains (2009) - Lindsay Lohan, Bridgit Mendler, Cheryl Hines
"A young woman with reason to be worried about her professional future hatches a plan where she pretends to be pregnant to avoid being fired."

Woman In Gold (2015) - Helen Mirren, Katie Holmes, Ryan Reynolds
"The inspirational true story of one woman's battle to recover her family’s priceless painting, which was seized by Nazis during World War II."

Blue Steel (1990) - directed by Kathryn Bigelow
"A rookie New York cop must deal with more than she bargained for, including a misconduct charge and a psychopath who's become obsessed with her."

Defending Our Kids: The Julie Posey Story (2003) - directed by Joanna Kerns
"Based on the true story of stay-at-home mother Julie Posey, who organized a movement of working with the police to investigate and prosecute child molesters after learning her teenage daughter was approached by a pedophile in an Internet chat room."

In Between (2015) - directed by Maysaloun Hamoud
"Three Muslim roommates grapple with differing personalities and views. While tensions rise, each tries to find her own place in a changing world."

Mad Money (2008) - directed by Callie Khouri
"Noticing a flaw in security, three women employed by the Federal Reserve band together to smuggle out millions in bills slated for destruction."

Miss Meadows (2015) - directed by Karen Leigh Hopkins
"Miss Meadows is just a prim school teacher on the outside but inside hides the soul of a vigilante, righting wrongs by whatever means necessary."

Monster (2003) - directed by Patty Jenkins
"The true story of a woman with a tortured past traces her path from prostitution, to hopeful love, to vengeful murder, to becoming a serial killer."

Palo Alto (2013) - directed by Gia Coppola
"A shy, young, virgin flirts with an illicit relationship with her soccer coach, in a world of adolescent lust, boredom, and insufficient parental guidance."

Revenge Ride (2020) - directed by Melanie Aitkenhead
"After a young woman is drugged and attacked, a ruthless all-female motorcycle gang decides to get revenge on the men behind the crime."

Shots Fired (2017) - directed by Gina Prince-Bythewood
"Racially charged shootings take an investigator and special prosecutor down a rabbit hole of corruption leading to the top of state government."

Strangerland (2015) - directed by Kim Farrant
"A couple’s dull life in an outback town is rocked, rumors fly, and a desperate search begins, when their teenage children disappear into the desert."

The Drowning (2016) - directed by Bette Gordon
"When a child psychologist saves a young man from committing suicide, he discovers that the two share a chilling connection to a murder."

Vamps (2012) - directed by Amy Heckerling
"A wise, exiled monk sent to a haunted monastery is asked to return by his Empress master, but evil forces don't want him to leave the dark side."

Whale Rider (2002) - directed by Niki Caro
"Disregarded by her village, a Maori girl trains herself in the customs of her people to prove she's the rightful heir to her grandfather as chief."

We Need To Talk About Kevin (2011) - directed by Lynne Ramsay
"In this suspenseful and gripping psychological thriller, a mother contends for years with the increasing malevolence of her first-born child, Kevin."

Documentaries in honor of Women’s History Month on Tubi

Anita (2013) - "A profile of Anita Hill, the African-American lawyer who accused US Supreme Court nominee Clarence Thomas of sexual harassment."

An Ordinary Hero: The True Story of Joan Trumpauer Mulholland (2013) - "The inspiring story of a Southern white woman who was disowned by her family, shot at, and put on death row for joining the Civil Rights Movement."

Free Angela and All Political Prisoners (2013) - "The story of professor Angela Davis, whose social activism implicated her in a botched kidnapping and put her on the FBI’s Most Wanted List in 1970."

GLOW: The Story of the Gorgeous Ladies of Wrestling (2012) - "This heartfelt documentary chronicles the rise and fall of the first-ever, all-female pro-wrestling show through the stories of those who lived it."

Half The Picture (2018) - "This insightful doc investigates Hollywood’s systemic discrimination by interviewing directors like Ava DuVernay, Jill Soloway, and others."

Harriet Tubman: They Called Her Moses (2018) - "The life and times of Harriet Tubman, who led the Underground Railroad of American slaves to freedom, are explored by scholars and historians."

Jaha's Promise (2017) - "A survivor of female genital mutilation and forced child marriage returns to her home country of Gambia to fight for a new generation of women."

MeToo: A Movement That Changed the World (2019) - "This documentary examines the tweet that actress Alyssa Milano sent, and how it led the charge for social awareness that took down corrupt men in power."

Play Fair (2015) - "An inspiring account of 50 years of activism and legal struggles to ensure that women have equal rights and access to compete in sports at all levels."

The Story of Women and Power (2014) - "For centuries women campaigned for political and sex equality in Britain, an inspiring struggle against injustice largely forgotten by history."

The Unknown: Serena (2019) - "Exploring the life and career of Serena Williams."

Why We Laugh: Funny Women (2013) - "Veteran funny-lady Joan Rivers hosts an honest look at the evolution of the female stand-up comedian through in-depth interviews with some of the most famous women in comedy."