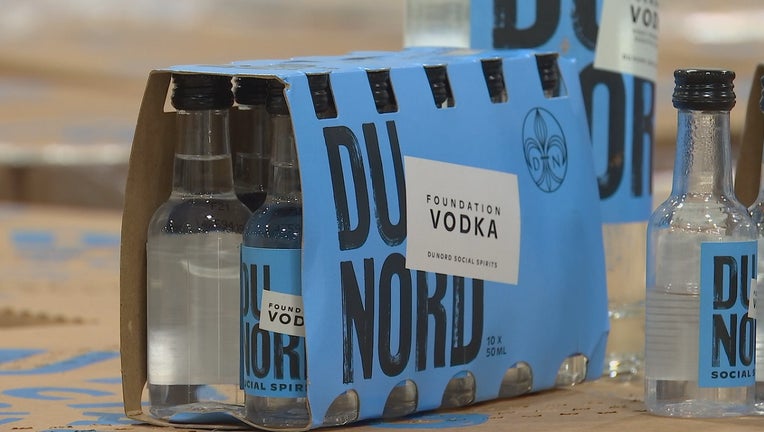 Du Nord vodka will now be on Delta flights. (FOX 9)

MINNEAPOLIS (FOX 9) - A Black-owned Minneapolis business is taking off with Delta, as the airliner adds the spirit maker's vodka to its flights.

Du Nord Social Spirits is now being served on most Delta flights. The owner, Chris Montana, says Delta bent over backwards to make sure this all happened.

"It’s a huge day and it’s one that’s a long time in the making," Montana explained. "We got a picture from a friend who flew on a flight this morning and they’ve got a bottle of Du Nord Social Spirits."

For Du Nord founder Chris Montana, this is a big step. At his warehouse in St. Paul, thousands of mini bottles of spirits are shipping out for flights destined around the world.

"We're starting with vodka," said Montana. "We're going to be moving some more products in next year. But as you can imagine, we're a small shop, so we have to take out flights that we can chew. And so this was the first step and we'll be continuing to grow the partnership in the future."

It’s a partnership built with patience. A year ago, Du Nord shifted production to make hand sanitizers during the peak of the pandemic. When Delta first contacted Montana, he had no spirits to sell. Delta told him they’d wait.

"This isn't how business is done," he explained. "Big businesses were reaching out to a tiny little shop like ours, and they had to bend over backwards to make it work. And they did."

Helping a Black-owned business was a priority for Delta. With its help, Du Nord has produced more spirits in the past couple of months than it has in its entire existence.

"And the real impact of it, aside from volume is impressions," he said. "It's the fact that people who are flying to any state in the nation and next year - also international - will be able to see our brand and ask that question of ‘who the heck are these guys?’ Because again, we're a tiny little shop and tucked away in Minneapolis. So that's the huge value to it for us."

In addition, part of the proceeds from the new business with Delta are going into the Du Nord Foundation, which supports a community food market on East 32nd Street in Minneapolis. The foundation is also helping other minority businesses get a start.