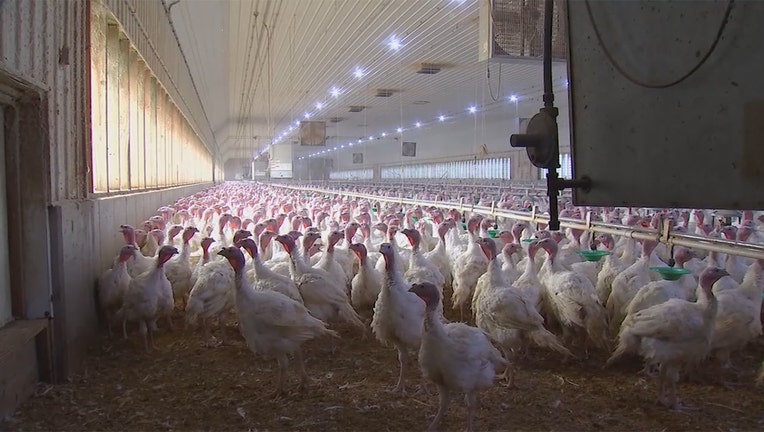 Poultry farmers are on high alert for the bird flu this year after a spread of it wiped out farms in 2015.

(FOX 9) - Cases of bird flu have now been detected at five spots in Minnesota, as worries grow among farmers in the state over the avian flu.

The farms are in Meeker, Mower, Stearns, Lac Qui Parle, and Kandiyohi counties, with most of the birds at a commercial turkey facility in Meeker County, which has 289,000 birds on site. The smallest is a flock of 17 backyard birds.

Governor Walz announced on Monday that the USDA has activated an emergency response team to help with the state's efforts to control the spread of bird flu. The H5N1 virus, which decimated flocks in Minnesota seven years ago, poses little risk to humans but is a growing concern in agriculture.

The bird flu virus that decimated poultry flocks in Minnesota seven years ago has returned, with state authorities confirming Saturday that they have detected cases in two flocks.

The USDA teams will support the state's Agricultural Incident Management Team's control and containment efforts. The state points out Minnesota is the nation's top turkey producer with more than 660 farms in the state and 40 million birds raised each year.

So far, cases have been detected in flocks in Meeker County, Mower County, and Stearns County. Along with commercial enterprises, there is also a concern for backyard flocks.

"It's not just the big guys that this can affect. If you have five to six birds in your backyard, they can be affected and if they are allowed to carry that virus, they can affect everyone around them... A fancy chicken or a heritage breed, or any other type of poultry can get this disease and die just as readily as a commercial bird," turkey farmer John Zimmerman told FOX 9 last week.