Joe Biden says America is experience a ‘wake up call’

In an address to the American public, Joe Biden addressed a need for strong, uniting leadership.

PHILADELPHIA - Joe Biden on Tuesday blistered President Donald Trump a day after police drove back peaceful protesters near the White House so Trump could pose with a Bible before a damaged church. Biden said Trump's “narcissism has become more important than the nation that he leads.”

The presumptive Democratic presidential nominee delivered a speech at Philadelphia's City Hall, addressing the civil unrest across America following the death of George Floyd. Biden said "the moment has come” to deal with systemic racism and deeply ingrained economic inequality — and insisted that the nation can't wait until November's election and its outcome.

“I call on the Congress to act this month," Biden said, urging lawmakers to start “with real police reform" and citing proposed legislation outlawing choke holds.

But Biden stepped up his criticism of Trump as he works to elevate his voice in the national debate — after more than two months of the campaign for the White House being frozen amid the outbreak of the coronarvius.

“This president today is part of the problem and accelerates it,” Biden said, adding that Trump is “consumed with his blinding ego."

Biden’s criticism comes a day after Trump threatened the nation’s governors that he would deploy the military to states if they did not stamp out violent protests over police brutality that have roiled the nation.

Authorities under federal command later forced back peaceful demonstrators in Washington with tear gas so the president could walk to nearby church St. John’s Church and pose briefly with a Bible. The church had sustained damage during Sunday protests.

RELATED: Trump warns governors he’ll deploy military across US to ‘solve the problem for them’ amid protests

Biden noted that “peaceful protesters” were dispersed from the “doorstep of the people’s house, the White House” using tear gas and flash grenades to stage what he called a “photo op” publicity stunt.

“The president held up a Bible,” Biden added. “I just wished he opened it once in awhile instead of brandishing it.”

The 20-plus minute address was covered live by cable networks and Biden used it to declare, "This job’s not about me. It’s about you. It’s about us.”

“Look, the presidency is a big job. Nobody will get everything right. And I won’t either,” Biden said, but promised, "I won’t fan the flames of hate.” 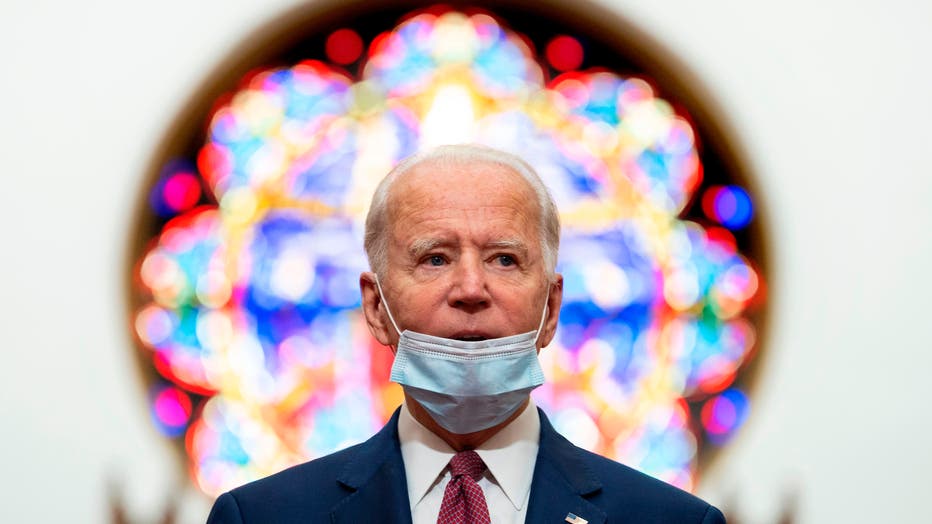 As the former vice president spoke, the National Guard maintained a visible presence to defend public buildings as Philadelphia grapples with sustained violent protests. Several adjacent businesses — banks, convenience stores and hotels were boarded up. A very small audience, including Mayor Jim Kenney, was on hand.

Biden is trying to create a stark contrast with Trump, who has embraced the language of confrontation and war, casting himself as the “president of law and order.” Trump signaled he would stake his reelection on convincing voters his forceful approach was warranted in a time of national tumult and racial unrest.

“I will seek to heal the racial wounds that have long plagued this country – not use them for political gain,” Biden said.

Joe Biden addressed the public to speak on the nature of current affairs amid record unemployment, a pandemic, and civil unrest.