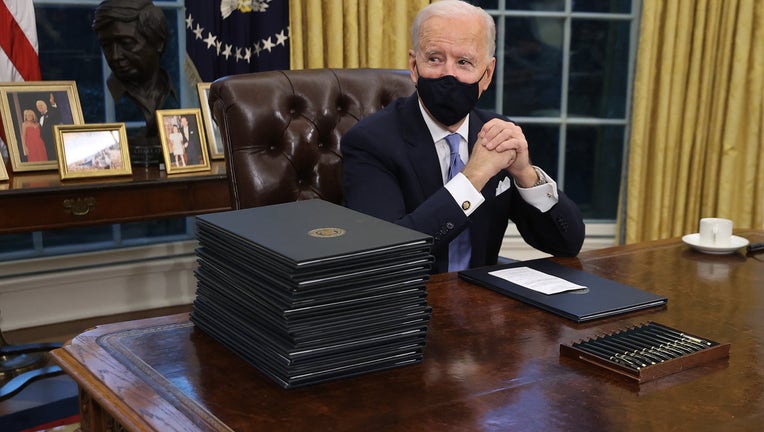 WASHINGTON, DC - JANUARY 20: U.S. President Joe Biden prepares to sign a series of executive orders at the Resolute Desk in the Oval Office just hours after his inauguration on January 20, 2021 in Washington, DC. Biden became the 46th president of th

WASHINGTON - President Biden’s immigration bill would change "alien" to "noncitizen" in U.S. law -- the latest move in the fight over language related to immigration and immigrants.

Biden’s administration is unveiling the U.S. Citizenship Act of 2021, which would include a number of radical measures such as an eight-year path to citizenship for illegal immigrants and immediate green cards for Deferred Action for Childhood Arrivals (DACA) and Temporary Protected Status (TPS) recipients.

While the text of the bill has not yet been released, a fact sheet put out by the Biden transition team before the inauguration said that the bill would remove the word "alien" from immigration laws and replace it with "noncitizen."

The fact sheet said the move "recognizes America as a nation of immigrants."

Immigration activists and lawmakers have long battled over language related to immigration. Many now refer not to illegal immigrants but "undocumented" immigrants.

"Alien" has long been used in U.S. code and immigration law as a whole, but has seen pushback from liberal activists and cities. New York City announced last year it would no longer refer to "aliens" or "illegal immigrants."

Meanwhile, during the Trump administration, there were battles over language from conservatives, too.

BuzzFeed News reported in 2019 that U.S. Citizenship and Immigration Services (USCIS) planned to change all references of the term "foreign national" to "alien" in the agency’s policy manual.

A USCIS spokesperson told the outlet that it was aligning with the Immigration and Nationality Act (INA).

"Under the INA, the term 'alien' means 'any person not a citizen or national of the United States,'" they said.

Biden has already made a number of significant moves on immigration, placing a 100-day moratorium on deportations, stopping wall funding and reversing the Trump-era travel bans.