President Biden speaks to U.S. troops in U.K. ahead of G-7, NATO Summits

President Biden embarked on his first trip overseas since taking office Wednesday, a journey in which he will meet with G-7 and NATO allies to discuss ways to address the coronavirus pandemic and an increasingly aggressive China and Russia.

WASHINGTON - President Joe Biden visited the United Kingdom on Wednesday as part of an eight-day trip to reassert the United States on the world stage and repair relationships with European allies.

After touching down in the U.K. at Royal Air Force Base Mildenhall, Biden delivered a speech to troops and their families stationed there, laying out many of the goals and events during the trip.

It is Biden’s first overseas trip as commander-in-chief, which will end in a June 16 summit meeting in Geneva to meet with Russian President Vladimir Putin.

"I’m heading to the G-7, then to the NATO ministerial, then to meet with Putin to let him know what I want him to know," Biden stated, bringing cheers to those in attendance.

The White House hopes the face-to-face Geneva meeting will help bring some predictability to a fraught relationship that’s only worsened in the first months of the Democratic administration.

"The United States is back and democracies of the world are standing together to tackle the toughest challenges and the issues that matter most to our future," Biden told service members in his remarks. "Our alliances weren't built by coercion or maintained by threats. They're grounded on democratic ideals, shared visions of the future, and where every voice matters."

In addition, Biden and British Prime Minister Boris Johnson are expected to meet Thursday to work on lifting COVID-19 travel restrictions between the U.S. and the U.K. that were put into place to stop the spread of the coronavirus.

Biden wants to privately pressure Putin to end myriad actions, including cybersecurity attacks on American businesses by Russian-based hackers, the jailing of opposition leader Alexei Navalny and repeated overt and covert efforts by the Kremlin to interfere in U.S. elections.

Before boarding Air Force One for Wednesday's flight, Biden told reporters the trip is about making clear to the leaders of China and Russia that the United States and Europe "are tight."

A chartered plane carrying reporters traveling to the U.K. for the trip was delayed for seven hours after being overrun by cicadas, which are swarming in full force in the Washington, D.C., area. The president also brushed a cicada from the back of his neck as he chatted with his Air Force greeter.

"Watch out for the cicadas," Biden told reporters. "I just got one. It just got me."

Biden will also head to Brussels for a NATO summit and a meeting with the heads of the European Union. It comes at a moment when Europeans have diminished expectations for what they can expect of U.S. leadership on the foreign stage. 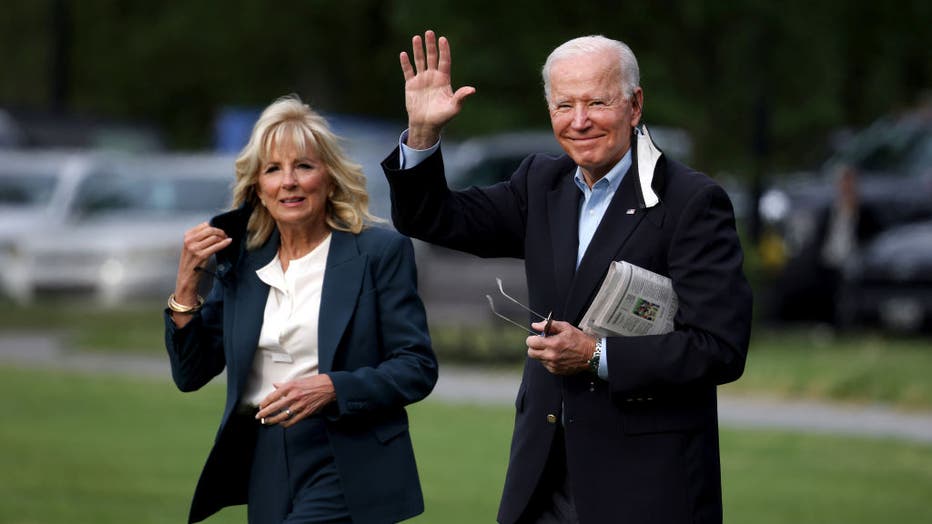 President Joe Biden waves as he and First Lady Jill Biden walk on the ellipse to board Marine One on June 9, 2021 in Washington, D.C. (Photo by Anna Moneymaker/Getty Images)

Administration officials have said the trip is more about messaging than specific actions or negotiations. Biden will face world leaders still grappling with the coronavirus and rattled by four years of former President Donald Trump’s "America First" foreign policy and moves that strained some longtime alliances.

"The trip, at its core, will advance the fundamental thrust of Joe Biden’s foreign policy," said national security adviser Jake Sullivan, adding that Biden also aims "to rally the world’s democracies to tackle the great challenges of our time."

The president is looking to regroup allies on their COVID-19 response and to urge them to coalesce around a strategy to check emerging economic and national security competitor China even as the U.S. expresses concern about Europe's economic links to Moscow. Biden also wants to nudge outlying allies, including Australia, to make more aggressive commitments to the worldwide effort to curb global warming.

The week-plus journey is a big moment for Biden, who traveled the world for decades as vice president and as chair of the Senate Foreign Relations Committee and will now step off Air Force One on international soil as U.S. president.

"In this moment of global uncertainty, as the world still grapples with a once-in-a-century pandemic, this trip is about realizing America’s renewed commitment to our allies and partners, and demonstrating the capacity of democracies to both meet the challenges and deter the threats of this new age," Biden wrote in an op-ed in the Washington Post previewing the trip.

Central and Eastern Europeans are desperately hoping to bind the U.S. more tightly to their security. Germany is looking to see the U.S. troop presence maintained there so it doesn’t need to build up its own. France, meanwhile, has taken the tack that the U.S. can’t be trusted as it once was and that the European Union must pursue greater strategic autonomy going forward.

"I think the concern is real that the Trumpian tendencies in the U.S. could return full bore in the midterms or in the next presidential election," said Alexander Vershbow, a former U.S. diplomat and once deputy secretary-general of NATO.

The sequencing of the trip is deliberate: Biden consulting with Western European allies for much of a week as a show of unity before his summit with Putin.

His first stop late Wednesday will be an address to U.S. troops stationed at Royal Air Force Mildenhall in Suffolk, England, and the next day he sits down with British Prime Minister Boris Johnson. The two men will meet a day ahead of the G-7 summit to be held above the craggy cliffs of Cornwall overlooking the Atlantic Ocean.

"This group of leading democracies and economies has not met in person in two years due to the coronavirus," Biden wrote of the G-7 summit in his op-ed. "Ending this pandemic, improving health security for all nations and driving a robust, inclusive global economic recovery will be our top priorities."

Officials say Biden has grown frustrated by the diplomacy-via-Zoom dynamics of the COVID-19 pandemic and has relished the ability to again have face-to-face meetings that allow him to size up and connect with world leaders.

While Biden himself is a veteran statesman, many of the world leaders he will see in England, including Johnson and French President Emmanuel Macron, took office after Biden left the vice presidency. Another, Germany’s Angela Merkel, will leave office later this year.