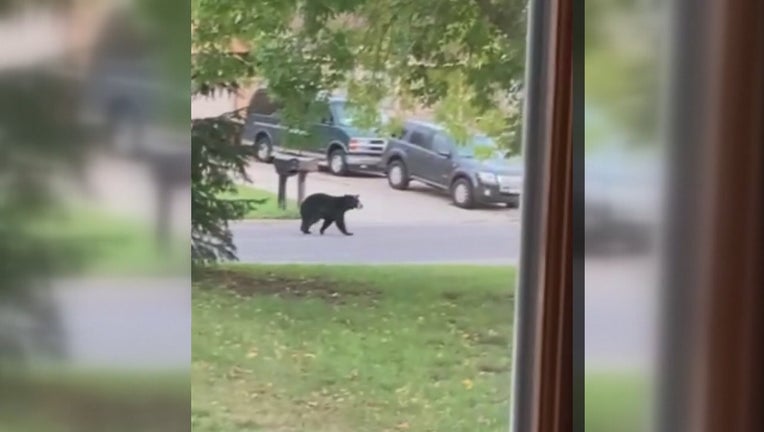 ELK RIVER, Minn. (FOX 9) - An eleven year old in Elk River, Minnesota woke up to quite the sight Wednesday morning as she spotted a black bear milling around her neighborhood.

Alerted by her dog Zoey, 11-year-old Coral Towns quickly hit record on her cell phone as she watched a black bear appear between her neighbors' houses and stroll across the street at about 7:30 a.m.

An 11-year-old girl filmed a black bear sighting in her Minnesota neighborhood after it caught her dog's attention.

"I was kind of nervous to go outside," said Towns.

"I called her and said do not go outside," added Coral's mother Lisa Towns. "She’s like I’m not going to go outside."

For many, interactions with wildlife are part of the appeal of Elk River. Zane Street, where this bear sighting occurred, is sandwiched between a marsh and, a couple of streets over, farmland.

"It's not entirely surprising," said neighbor Jon Hinkle. "We get deer around here all the time, had a big fat raccoon that runs around. Haven’t see any bears though, that’s a little disconcerting because I have three little kids."

The Elk River police chief points out while there have not been any bear reports as of late, the naturally curious creatures often avoid contact with humans because they are scared of us. Yet during a drought, as food sources for the bears dwindle, garbage day can be extra tempting. As always, it’s advised to keep your distance if you spot a bear.

An 11-year-old girl's dog alerted her to a black bear running down the street in her neighborhood in Elk River, Minnesota early Wednesday morning. Video credit: Coral Towns

"She stuck with her instincts and that was really smart," said Lisa.

Instead of walking out the door minutes later to catch her school bus, Coral’s stepdad returned home to give her a lift. Now, some other parents in the neighborhood plan to have extra bear safety conversations with their own kids.

The DNR reminds after a spotting like this to reduce food sources: Store garbage cans inside the garage, along with bird feeders and compost. At least for the next several weeks until bears begin to hibernate in mid-November.