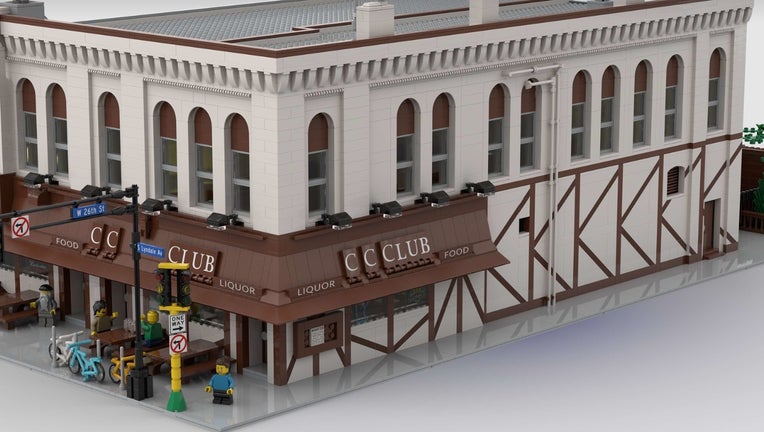 A LEGO version of the CC Club in Minneapolis. (Ryan Fuchs)

MINNEAPOLIS (FOX 9) - A local bartender is going viral for his incredible virtual LEGO creations. All of them are of Twin Cities landmarks with meticulous attention to detail.

For most of his life, Ryan Fuchs has enjoyed building LEGO sets in real life, but thanks to the pandemic, he has turned his LEGO building skills to the digital world instead.

A local bartender is going viral for his incredible virtual LEGO creations. All of them are of Twin Cities landmarks with meticulous attention to detail.

"Putting the bricks together and seeing how and why it’s constructed and understanding that. That's what I get out of it," said Fuchs.

When COVID-19 closed bars and restaurants back in March, Fuchs, who has worked as a bartender at Otter's Saloon for the last 10 years, found himself with a lot of extra time on his hands. So, he found a computer program that allowed him to build a virtual LEGO model of the bar, which he soon followed up with other watering holes like the CC Club and Spring Street Tavern as well as local landmarks like the IDS Center, the Hennepin Avenue Bridge and Mickey's Diner.

"It brings back a lot of heartstrings for people to revisit places that don't exist anymore or aren't open anymore," said Fuchs.

After the lead singer of the band Trailer Trash posted pictures of Fuchs' LEGO version of the now closed Lee's Liquor Lounge complete with a miniature version of the band performing inside, the images Fuchs had on social media went viral.

Fuchs says it takes him about a month to build each digital model, but they cost a lot less than they would if they were made of plastic pieces.

"LEGO bricks are very expensive," he said. "As people have people found out, the average cost of one of these bar sets would cost between $5,000 to $6,000. That's a lot of bricks to collect and pay for."

Fuchs is currently working on a virtual LEGO version of Nye's Polonaise room and he's in talks with the owner of the CC Club to make a LEGO model of that bar take physical form.

In the meantime, he hopes his creations continue to bring back memories of some of his city's most well-known places.

"I am having fun,” he said. "Amazed by the attention this is getting. I'm glad I am making people happy."