"Baby Yingliang" is a well-preserved fossilized dinosaur egg that has given scientists another link between prehistoric creatures and modern birds. (Credit: Yingliang Stone Nature History Museum via Storyful)

Scientists have discovered a well-preserved fossil of a dinosaur egg that has strengthened the links between prehistoric creatures and modern birds.

Researchers from the University of Birmingham and China University of Geosciences (Beijing) have named the fossilized egg "Baby Yingliang." What makes this discovery so unique is how well preserved the embryo is.

Fion Waisum Ma said most dinosaur fossils are incomplete with dislocated bones. Because this one was still intact, researchers observed its head positioned below its body with its feet on either side and its back tucked along the blunt end of the egg.

"It is interesting to see this dinosaur embryo and a chicken embryo pose in a similar way inside the egg, which possibly indicates similar prehatching behaviors," Waisum Ma said.

Prof. Steve Brusatte, from the University of Edinburgh, called the fossil one of the most beautiful he’s ever seen. 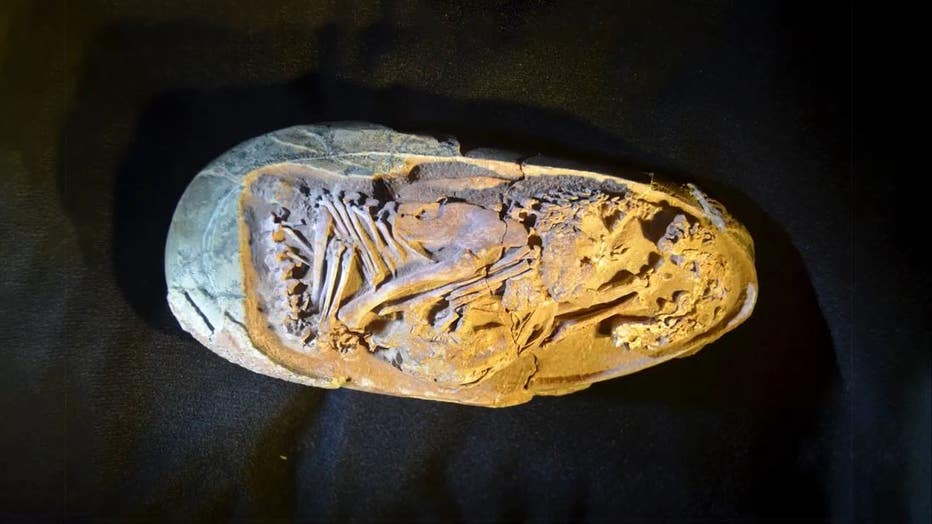 "Baby Yingliang" is a well-preserved fossilized dinosaur egg that has given scientists another link between prehistoric creatures and modern birds. (Credit: Yingliang Stone Nature History Museum via Storyful)

"This little prenatal dinosaur looks just like a baby bird curled in its egg, which is yet more evidence that many features characteristic of today’s birds first evolved in their dinosaur ancestors," he said.

Scientists said the fossil is between 66 and 72 million years old. It was actually found in 2000 but sat in storage, unstudied for a decade, said Professor Lida Xing from China University of Geosciences (Beijing).

During the construction of Yingliang Stone Nature History Museum in the 2010s, museum staff sorted through the storage and discovered the fossil.

"These specimens were identified as dinosaur egg fossils. Fossil preparation was conducted and eventually unveiled the embryo hidden inside the egg. This is how ‘Baby Yingliang’ was brought to light."