A milestone was crossed in global COVID-19 recoveries this week, but there was also an alarming rise in cases in some areas.

BOSTON - As coronavirus cases tick upward in various states across the country, while plans to reopen continue amid protests and presidential campaign rallies — the U.S. has found itself in a state of confusion as it relates to the COVID-19 pandemic.

Do the troubling increases in cases mean we’re in the midst of a “second wave?” Have states reopened too soon? Is it even necessary to wear a mask if President Donald Trump and other leaders aren’t wearing one?

Dr. Anthony Fauci, director of the National Institute of Allergy and Infectious Diseases, said this week we’re still in the “first wave” of the pandemic.

The confusion stems from not having one national narrative, but rather 50 different narratives.

“All 50 states are in different parts of the curve so I think that’s where it becomes confusing, because some states are coming off the peak and are actually actively declining past a plateau,” said Dr. Tom Tsai, a surgeon and health policy researcher at Harvard T.H. Chan School of Public Health. “Some states have peaked and are stuck in a plateau. And then we have states like Arizona, Texas and Florida, where there is now sort of a big resurgence.”

RELATED: Arizona sets another record for increases in COVID-19 cases

As a nation, new coronavirus cases are essentially stuck on a plateau at more than 20,000 cases per day, which hasn’t changed much from a month ago. More than 2.2 million people have been infected with COVID-19 in the U.S., according to data compiled by Johns Hopkins University. 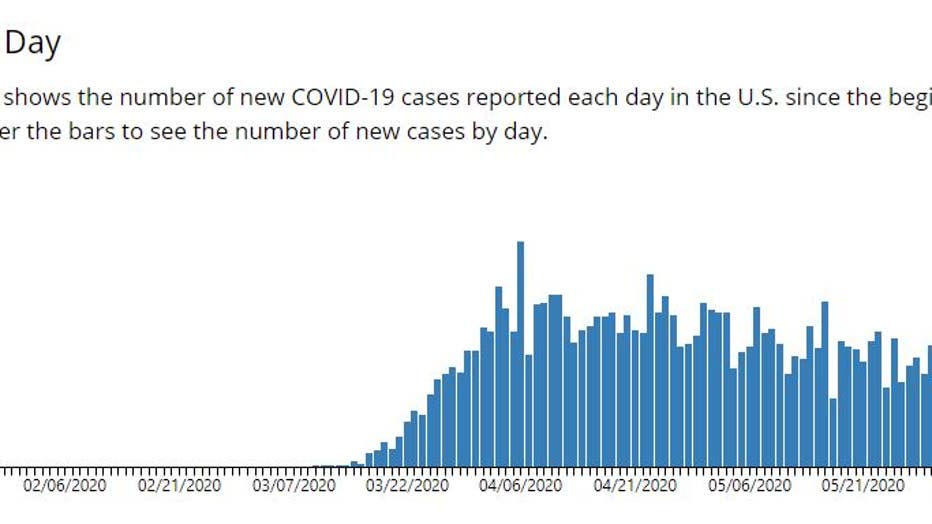 A graph from the Centers for Disease and Prevention shows the number of new COVID-19 cases reported each day in the U.S. since March. (Photo credit: CDC)

Worldwide, more than 8.5 million have been infected with the virus. The World Health Organization warned June 19 of a “new and dangerous” phase of the pandemic amid a record single-day case count globally.

“We’re stuck at over 20,000 cases a day, where if you look at other countries that had a more robust response, they’ve come off the mountain because they’ve actually managed to suppress and contain the infection,” Tsai said. “We’ve been trudging along just mitigating the effects of the infection.”

Meanwhile, the country is also trudging along with phased reopening plans. People are going back to work, visiting hair and nail salons and eating at restaurants again. Many have gathered for large, outdoor demonstrations in the wake of George Floyd’s death. Trump is resuming campaign rallies, including one on June 20 at a large indoor venue in Tulsa, Oklahoma.

Despite public health officials continuing to stress the importance of wearing a mask and physical distancing, it doesn’t seem like everyone has received the message.

Rainey Strader, 48, who traveled to Tulsa for the Trump rally from Iowa with her husband and 75-year-old mother, said Thursday that she brought a mask but isn't sure if she will wear it once she gets inside the venue. Strader said she isn't worried about COVID-19, which she considers to be “like the flu.”

The mask seems to have become politicized. Trump doesn’t wear a mask in front of cameras, and the debate over whether to require face coverings in public has raged on at the state level across the country.

Strader's mother, Catherine Pahsetopah, also said she's not sure if she will wear her mask, despite being considered high-risk for COVID-19 because of her age and having health problems.

But Tsai said “the overwhelming consensus now” is that masks work — and we need to wear them. We also need to get tested even if we don’t have symptoms, and keep practicing social distancing.

“These are all layers of security,” Tsai argued. “My car has a seat belt, it also has an airbag. I also stop at the stop sign, and I look both directions before I turn. These are all different layers of risk reduction that we have to do. Doing any of them alone is not adequate.”

Some have also argued that stay-at-home measures and business shutdowns, which devastated the economy and led to millions of Americans losing their jobs, was an overreaction to the threat — which has claimed close to 119,000 lives in the U.S. and nearly 500,000 around the world.

Tsai compared this notion to a game of football.

“You’re up at halftime. Do you go to the locker room and say we played too good of defense in the first half? That’s not the point,” Tsai explained. “The point is to win the game, and nobody knows how this game is going to end. It’s probably not even halftime. It’s probably the commercial break between the first and second quarter.”

Moving forward, Tsai and his team believe that instead of focusing on a supply of testing, we need to figure out how to increase the demand for testing.

“That means moving away from just symptomatic individuals and testing everyone. Testing is a public good,” he said.

As the pandemic drags on, the trade-offs will undoubtedly become more and more profound.

“Our public health officials and policymakers need to be consistent about the pandemic,” Tsai said. "We know what the game plan is. Other countries have done it. It’s just that we have to have the will to do it, but now it’s the will of 50 different governors."