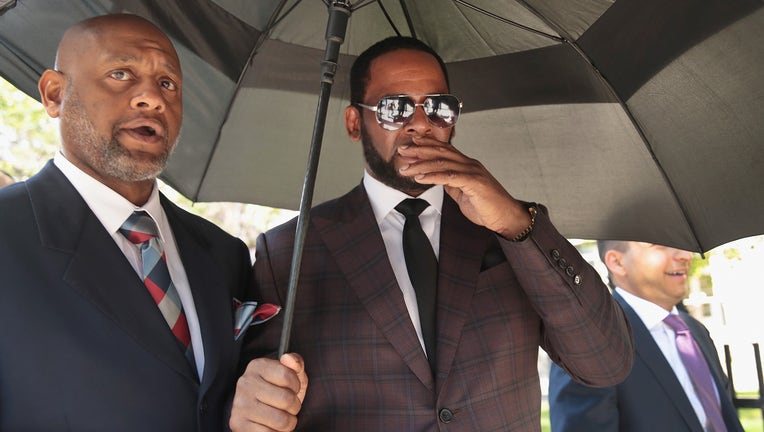 CHICAGO, ILLINOIS - JUNE 26: R&B singer R. Kelly covers his mouth as he speaks to members of his entourage as he leaves the Leighton Criminal Courts Building following a hearing on June 26, 2019 in Chicago, Illinois. Prosecutors turned over to Ke

MINNEAPOLIS (FOX 9) - A Hennepin County judge issued a warrant Thursday for the arrest of R&B singer R. Kelly after he failed to show up for court in Minneapolis on charges of prostitution and soliciting a minor.

Last month, Hennepin County Attorney Mike Freeman charged the singer, whose full name is Robert Kelly, with two counts of prostitution and solicitation involving a girl under 18 in 2001.

The 52-year-old is already facing federal charges for allegedly sexually abusing women and girls who attended his concerts, to which he pleaded not guilty. He was arrested in Chicago in July for allegedly engaging in child pornography.

Neither the U.S Attorney in Illinois nor Kelly’s defense attorneys wanted him to attend Thursday’s court hearing in Minneapolis.

Minneapolis investigators first learned of the incident when the victim called a law enforcement hotline earlier this year to report a sexual encounter with Kelly.

According to the charges, Kelly met the victim, a 17-year-old girl, in July 2001 when he was in Minneapolis for a concert. She sought his autograph, and he signed his name as well as wrote down a phone number.

The victim called the phone number and was directed to the musician’s hotel in downtown Minneapolis, where he allegedly paid her $200 to get naked, dance and have sexual relations with him.