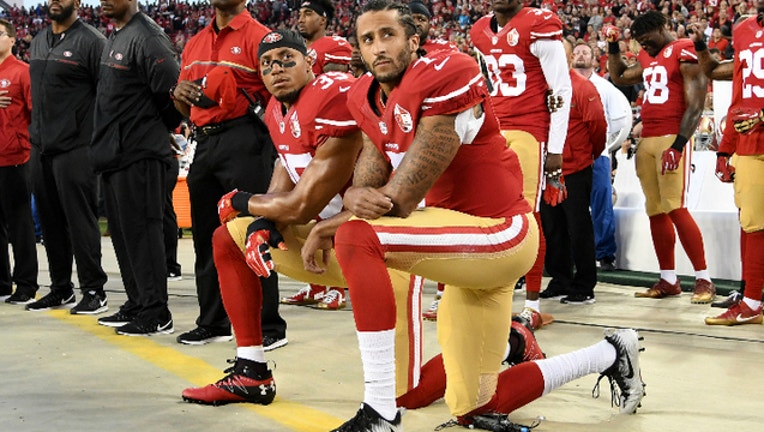 SANTA CLARA, CA - SEPTEMBER 12: Colin Kaepernick and Eric Reid of the San Francisco 49ers kneel in protest during the national anthem prior to a game on September 12, 2016 in Santa Clara, California. (Photo by Thearon W. Henderson/Getty Images)

PHILADELPHIA (AP) - An arbitrator is sending Colin Kaepernick's grievance with the NFL to trial, denying the league's request to throw out the quarterback's claims that owners conspired to keep him out of the league because of his protests of social injustice.

Kaepernick's lawyer Mark Geragos tweeted a picture Thursday of a ruling by arbitrator Stephen B. Burbank.

The former 49ers quarterback argues that owners have colluded to keep him off any NFL roster since he hit free agency in 2017.

Kaepernick began a wave of protests by NFL players two seasons ago, kneeling during the national anthem to protest police brutality and racial inequality. The protests have grown into one of the most polarizing issues in sports, with President Donald Trump loudly urging the league to suspend or fire players who demonstrate during the anthem.

Kaepernick contends the owners violated union rules by conspiring to keep him off of teams.