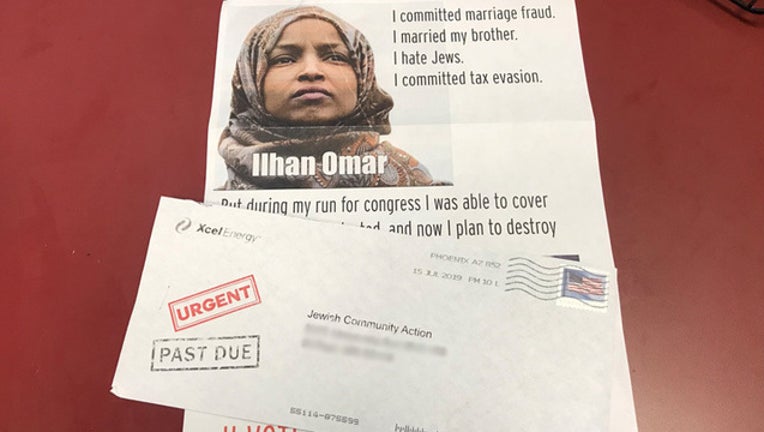 ST. PAUL, Minn. (FOX 9) - Xcel Energy says it has contacted the authorities after Jewish Community Action – Minnesota tweeted a photo of an anti-Congresswoman Ilhan Omar mailer that appeared to be from Xcel.

The JCA shared the photo Thursday afternoon that shows the mailer and the envelope in which it came.

The envelope has the Xcel Energy logo in the return address and includes stamps that say “URGENT” and “PAST DUE.” The postmark is from Phoenix, Arizona and the letter was addressed to Jewish Community Action’s St. Paul offices.

“Besides the disgusting attacks here, it’s edifying to know the Congresswoman’s critics are comfortable with mail fraud,” said the JCA’s tweet.

Xcel replied to the tweet saying the mailer constituted mail fraud. The company encouraged anyone else who received the mailer to contact authorities.

The company also condemned the contents of the possibly illegal mailer.

“We’re a company that embraces diversity and inclusion, and this goes against all of our values,” Xcel’s tweet said.