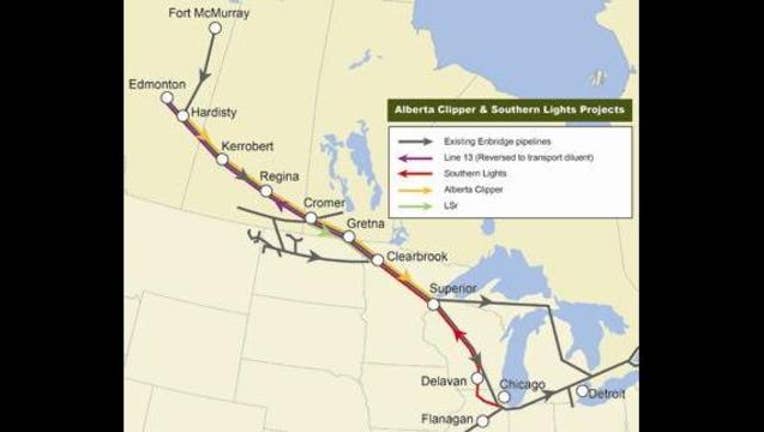 MINNEAPOLIS (KMSP) - MINNEAPOLIS (AP) -- A federal judge heard conflicting arguments Thursday on whether he should block a capacity expansion on the Alberta Clipper oil pipeline or allow a temporary workaround that lets Enbridge Energy move hundreds of thousands of barrels per day of Canadian tar sands crude across the border without triggering the kind of environmental review that has held up the proposed Keystone XL pipeline.

A lawyer for a coalition of tribal, environmental and climate change groups including the White Earth Nation told U.S. District Judge Michael Davis that the State Department should not have let Enbridge circumvent the environmental review by constructing a detour around a three-mile segment of the Alberta Clipper that still requires a presidential permit for expanded capacity. The segment at issue runs between the Canadian border and the first shutoff valve down the line.

Ken Rumelt, an environmental attorney from the Vermont Law School, said the move "eviscerated the opportunity for any meaningful input" by the plaintiffs, who say Enbridge's plan to ultimately expand the capacity of the Alberta Clipper from its current 500,000 to 800,000 barrels per day threatens environmentally sensitive lakes, streams and wetlands in northern Minnesota, and resources such as wild rice that are important to the area's Ojibwe bands.

The 1,000-mile Alberta Clipper, built in 2010, starts in Alberta, crosses into northeastern North Dakota and runs across northern Minnesota to an Enbridge terminal in Superior, Wisconsin. It follows the same route as Enbridge's deteriorating Line 3, which dates from the 1960s. Enbridge last year upgraded a 16-mile segment of Line 3 at the border and built interconnections between the parallel pipelines to allow for the detour from the Alberta Clipper to Line 3 and back.

Lawyers for the federal government and Enbridge told the judge that the company had the authority to build the bypass under its existing presidential permit for Line 3 and didn't need State Department approval. They said letters that the State Department sent to Enbridge last year merely acknowledged that existing authority and didn't constitute an actual decision that the court would have jurisdiction to overturn, so the court should dismiss the lawsuit.

Justice Department attorney Luke Hajek, representing the State Department, also pointed out that the environmental review for the border segment of the Alberta Clipper is underway, and said critics including the plaintiffs will have ample opportunity to weigh in once it's completed.

Davis took the arguments under advisement and didn't say when he would rule.

The case is separate from several other pipeline projects working their way through other approval processes, including Enbridge's plan to completely replace Line 3, plans for pipelines to carry North Dakota crude across Minnesota, and the Obama administration's protracted consideration of whether to grant a border-crossing permit to the Canada-to-Texas Keystone XL pipeline.

But outside the courthouse, environmental and tribal activists were quick to draw connections.

"President Obama has laid out an aggressive plan to tackle climate change," said Margaret Levin, state director for the Sierra Club. "But agreeing to a backroom deal ... is in direct contrast to the president's stated commitments, and it tarnishes the administration's credibility as a world leader on climate."