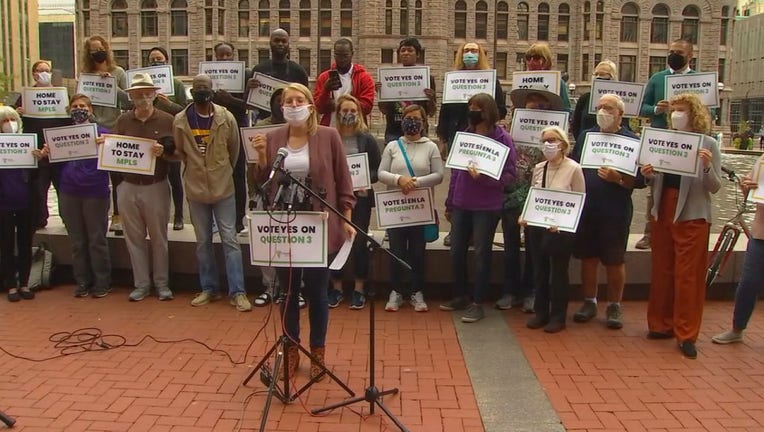 MINNEAPOLIS (FOX 9) - Early voting starts this Friday for the November elections, and Minneapolis has a lot on the ballot.

The mayor and the entire city council is up for reelection, but there are three big ballot questions for voters.

Advocates are pushing for an ordinance that would prevent unchecked rent increases in Minneapolis.

The first asks voters whether to shift more power to the mayor in running city departments. The second question asks whether to eliminate the police department in place of a department of public safety. However, this question remains in limbo after a judge struck down the question on Tuesday. The city is planning to appeal.

The third question focuses on rent control. This question asks voters whether to amend the city charter to allow the council to adopt an ordinance regulating rents on privately owned property.

A coalition called Home to Stay Minneapolis announced their tactical plan to encourage people to vote yes on ballot question three. They said they intend to make 85,000 phone calls and send an equal amount of text messages in addition to a digital media buy.

One woman at Tuesday’s rally said low income families cannot afford the rent increases they are seeing in Minneapolis.

"We are in urgent need of change and we're here to ask for that change, that families shouldn't have to be worried about their rent increasing three or four times so they're worried about their health or where the next meal for their children comes from," said Vanessa del Campo with Home to Stay Minneapolis.

There are a number of cities in five states that have some form of rent regulation. This includes cities like San Francisco and Los Angeles, as well as the state of Oregon. On the East Coast, cities in New York, New Jersey, Maryland and D.C. also have rent regulations.

Each law is a different, but the goal in each city is to prevent unchecked rent increases.

"Rent’s going up, but my paycheck hasn't," said Troy Bowman with Home to Stay Minneapolis.