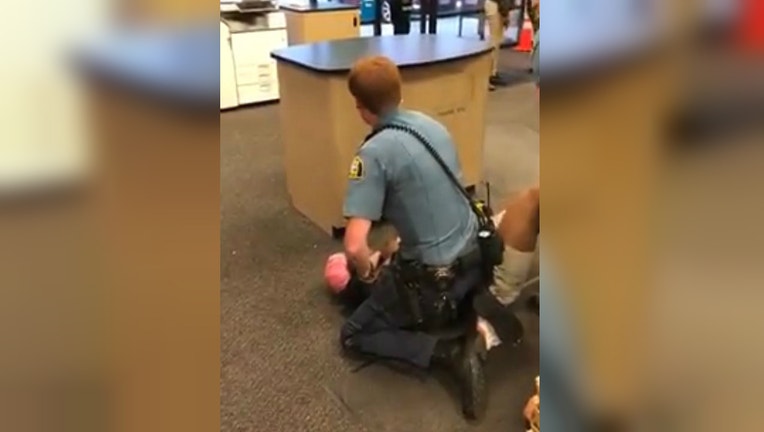 ST. PAUL, Minn. (FOX 9) - Prosecutors have filed a criminal charge against the13-year-old girl whose arrest in St. Paul, Minnesota was captured in a viral video.

The teen girl has been charged with assault in the fourth degree following the arrest.

A widely viewed video on social media showing the arrest of a 13-year-old girl in St. Paul is causing quite a stir. In a press conference Thursday, St. Paul Mayor Melvin Carter further explained his call for an internal investigation but warns of not rushing to judgment of the police or the girl.

The girl, who hasn't been identified due to her age, was arrested at UPS Store on University Avenue last week. Officers said the girl was well-known to them and had run away from a nearby BP gas station when police arrived in the area.

Later, officers responded to teens trying to open vehicles in a store parking lot. After responding, police say the suspects went inside the UPS Store.

Inside, a video shot by a bystander showed the officers struggling with the girl on the ground as she yells and cries. Police say the girl fought with officers, kicking, scratching and punching at them.

"We know that arresting a person who is physically resisting can be difficult to watch, but we’re thankful that no one was seriously injured," read a statement from a St. Paul police spokesman on Wednesday.

The video was later posted online and has led to some community outcry.

Thursday, St. Paul Mayor Melvin Carter promised transparency as the police department looked into the video which he previously said was "deeply disturbing to watch." At the same time, the mayor urged residents not to rush to judgment based solely on the video.

The girl's brother, who is 14, was also arrested following the incident. It's not clear what charges he may face.