(FOX 9) - Eleven straight days with highs in the 70s to start the month of October is something I never thought would be possible, but it happened this year. That has led to the third warmest start to the month on record and has made for an almost summer feel well into the fall season.

However, temperatures are finally tumbling at the end of this week which should give us our first below average day in nearly three weeks on Friday.

Our cooler air mass will give us highs in the 50s for the first time this year. Amazingly, that will go down as the latest in the fall season we have ever seen our first high temperatures under the 60-degree mark. That beats out some 100-plus year old records for the latest we had ever done this, set on the 10th of October in 1909 and 1905. 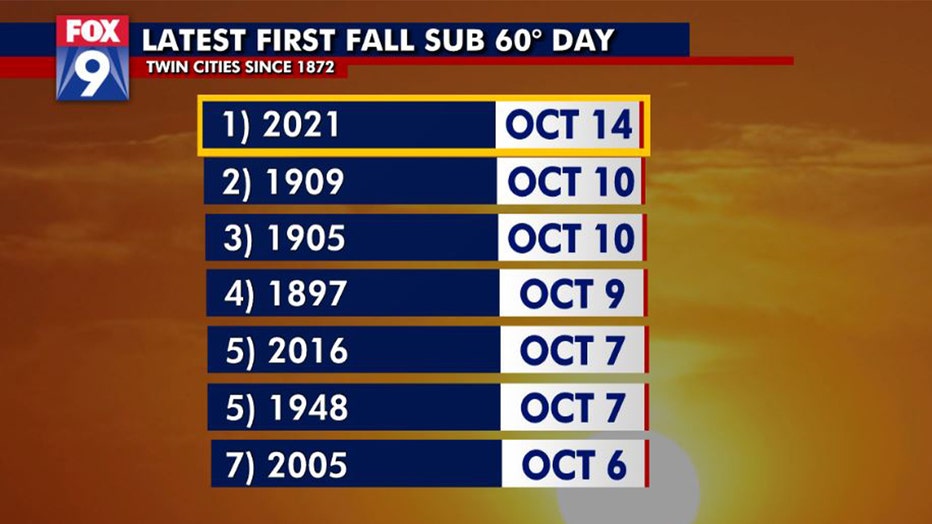 This will go down as the latest in the fall season we have ever seen our first high temperatures under the 60-degree mark.  (FOX 9)

We'll often receive at least one rainy cool day to round out September or to start October, but that just didn't happen this year. The sunshine and continued southeast flow kept temperatures and dew points much higher than what is typical.

Now though we're starting to see temperatures take on a cooler spin. However, more average and above average temperatures are expected right through the weekend and into next week. Does that spell more 70s? Well, it just might.