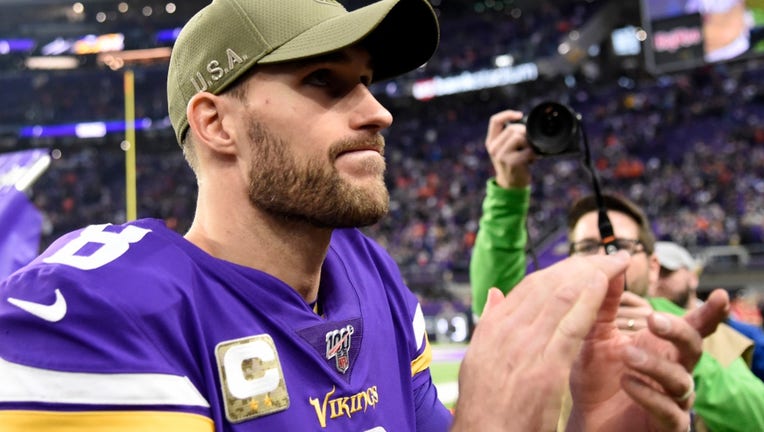 Kirk Cousins #8 of the Minnesota Vikings celebrates a 27-23 win against the Denver Broncos at U.S. Bank Stadium on November 17, 2019 in Minneapolis, Minnesota. ((Photo by Hannah Foslien/Getty Images))

EAGAN - Minnesota Vikings fans have seen the story before. Favored by double digits last year against the Buffalo Bills, they suffered an inexplicable 27-6 loss in front of an angry fan base at U.S. Bank Stadium.

Sunday, the Vikings were booed off the field at the end of the first half against the Denver Broncos. They trailed 20-0 after entering the game 10.5-point favorites, and nothing was working in any phase. They needed a spark, and it came from a guy who’s played as well as anyone in the NFL over the last six weeks.

Kirk Cousins threw for 319 yards and three touchdowns as the Vikings rallied for a 27-23 win over the Broncos, improving to 8-3 going into their bye week. They avoided having a salty taste in their mouth for the better part of two weeks, and Cousins got his first fourth quarter comeback win since coming to Minnesota on a three-year, $84 million contract.

“The biggest thing is I like the resiliency of this football team. They could’ve laid down at halftime, they fought and kept fighting, kept scratching. Kirk played fantastic, probably his best game he’s played since he’s been here,” Vikings coach Mike Zimmer said Monday.

After a forgettable first half, the Vikings surged to a victory Sunday night

After getting shutout at home in the first half, the Vikings scored 27 points in the second half to secure a victory over the Broncos.

The comeback started with Cousins hitting Irv Smith Jr. for 10-yard touchdown on the opening drive of the second half. It was Smith’s first career touchdown, and the rookie has been getting more looks in the offense with Adam Thielen out nursing a hamstring injury. Smith had three catches for 20 yards Sunday.

The Vikings weren’t phased when facing a 23-7 deficit heading into the fourth quarter. Dalvin Cook, despite rushing for only 26 yards and 2.1 yards per carry, got the Vikings within 23-13 after a 3-yard touchdown run.

With the run game largely eliminated, Cook continued his increased role in the screen game with five catches for 31 yards. Cousins and the Vikings went to an up-tempo offense to get back in the game, and it worked.

“For us, the hurry up offense has definitely brought a big spark to us. Coach Stefanski did an awesome job of seeing that we needed to do that and sticking with it a majority of the second half,” Smith said.

With the defense settling in, Cousins went to work. He hit Stefon Diggs on a 54-yard touchdown to get the Vikings within 23-20 with 10:21 to play. Four minutes later, he rolled out and hit an open Kyle Rudolph for a 32-yard touchdown. It was Rudolph’s longest touchdown catch of the season.

Cousins had just six incomplete passes on the day and finished with a 133.2 rating despite being sacked five times. He’s also gone 177 straight throws without an interception, the longest current active streak in the NFL. He’s the fastest Viking quarterback to 50 touchdowns with the team, doing so in 27 games.

Cousins silenced a few doubters last Sunday, after leading the Vikings to a 28-24 at AT&T Stadium against the Cowboys under the bright lights of Sunday Night Football. Zimmer doesn’t really care about the narrative that Cousins struggles in the national spotlight in big moments.

The Broncos responded, driving the ball in the last six minutes of regulation down to the Vikings’ 4-yard line. Brandon Allen, making his second career start, went after Jayron Kearse with regularity. Kearse responded and on the game’s final play, forced an incompletion that sealed a Vikings’ win. It was his second game-ending play in as many games after intercepting Dak Prescott on Hail Mary pass last Sunday.

After getting carved up in the first half Sunday, Minnesota’s defense limited the Broncos to 162 total yards, a field goal, a punt and a missed field goal in the second half. Denver had a 19-play drive to end the game, and it ended without any points.

The Vikings also became the first team in the last five seasons to win after trailing by at least 20 points. Before Sunday, teams were 0-99 in such a scenario.

“It tells you two things really. If we wait to flip the switch, then we’re not going to win many of these games,” Zimmer said. “But if we play like we can play and we use the competitiveness and the fight and the toughness and the intelligence that we mostly played with in the second half, we can win a lot of games.”

It was a huge win in multiple ways for the Vikings. They improve to 8-3 heading to their bye week, the fourth time in franchise history they’ve been 8-3. The Vikings have made the playoffs each of the previous three times, including in 2015 under Zimmer.

After the bye week, the Vikings head to Seattle for Monday Night Football before three out of four at home against the Lions, Packers and Bears to end the season. They trail the Packers by one game in the loss column in the division, and have put themselves in playoff position, at least for now.

“I know where we’re at. I don’t know, there’s still quite a few games to play I guess. It’ll all sort itself out here in this next month and a half,” Zimmer said.