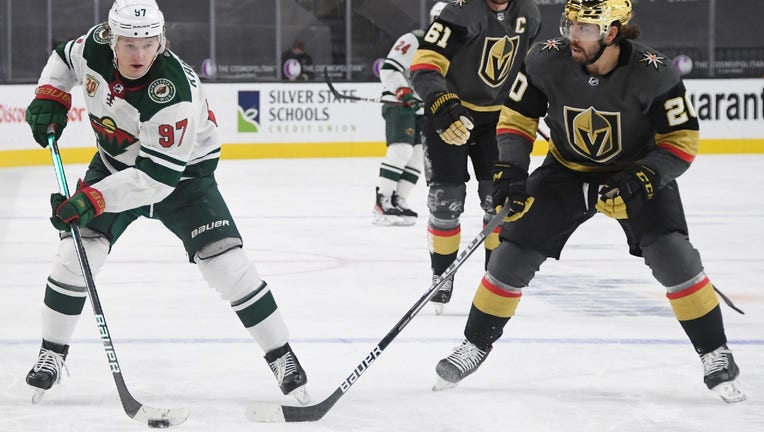 Kirill Kaprizov #97 of the Minnesota Wild skates with the puck against Chandler Stephenson #20 of the Vegas Golden Knights in the third period of their game at T-Mobile Arena on March 1, 2021 in Las Vegas, Nevada. The Golden Knights defeated the Wild ((Photo by Ethan Miller/Getty Images))

MINNEAPOLIS - The Minnesota Wild had a chance to take over first place in the Honda West Monday night at Las Vegas.

They had a chance to win their seventh straight game, and remain the hottest team in the NHL. The Wild had a 4-2 lead over the Golden Knights in the third period, and saw it slip away in the final seconds of regulation before losing in overtime, 5-4.

Las Vegas scored a pair of third period goals about eight minutes apart, including the game-tying goal from former Wild player Alex Tuch with 42 seconds left in regulation. Max Pacioretty scored the game-winner for the Golden Knights two minutes into the extra session, and Mark Stone assisted on all five Vegas goals.

Las Vegas rallied despite not getting a shot on goal for nearly the first 12 minutes of the third period.

The Wild managed to get a point out of the game, but squandered a multi-goal lead and saw an opponent rally in the third period for the second straight game. Minnesota had a 3-0 lead over the L.A. Kings on Saturday before having to score the game-winner in overtime.

The Wild dropped to third in the West after the loss, two points behind the Golden Knights and one point behind the St. Louis Blues. Dean Evason isn’t discouraged as the two teams will do battle again Wednesday night.

"I thought we played a really good game. We both know what’s expected here from each other, so it’s going to be fun going forward against this group. I thought our group conducted themselves extremely well. Obviously we didn’t get the job done, but we did a lot of real, real good things in this hockey game," Evason said.

After a scoreless first period, the Wild put up for goals in the second to take a 4-2 lead in the third period. Minnesota got two goals from Marcus Foligno, and goals each from Jordan Greenway and Nick Bonino.

"I think we just left off the gas a little bit. Give credit to their top line, they played and they didn’t really chip it in. They did a good job of carrying the puck in and sustaining pressure, but we’re still a good enough team where we can hold onto leads like that and get the win. It’s unfortunate, just got to be more aggressive. That’s a team that can make you pay," Foligno said.