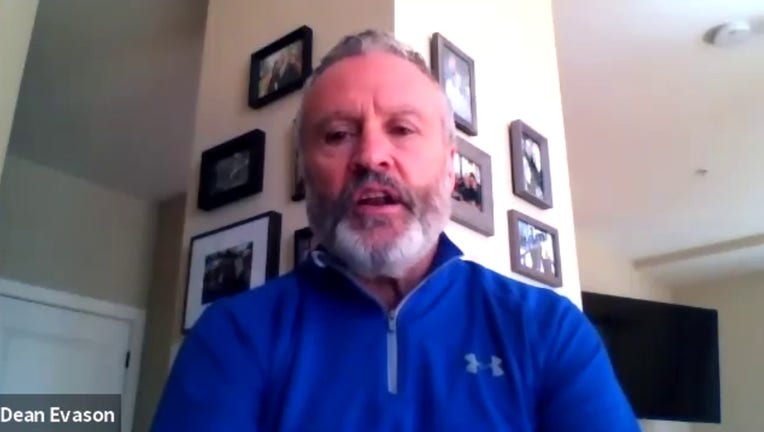 Wild interim coach Dean Evason spoke with reporters Wednesday about the team and the NHL season, currently suspended due to the Coronavirus pandemic.

MINNEAPOLIS - Dean Evason tries his best daily to focus on what he can control, while the NHL pursues every viable and available way to get back on the ice.

Evason was 12 games into his interim coach status after Bill Guerin fired Bruce Boudreau. The Minnesota Wild was playing some of its best hockey of the season as they were preparing to take the ice for morning skate on March 12, prior to hosting the Vegas Golden Knights at Xcel Energy Center.

That game never happened. Players were stopped before getting to the locker room, and promptly sent home. The NHL suspended its season due to the Coronavirus pandemic. At the time, the Wild was 7-3 in its past 10 games and one point out of the final spot in the Western Conference Playoffs.

Evason is in contact with his coaching staff weekly, and as recently as Monday they talked over conference call over plans for a training camp if and when the NHL makes the call to resume play. That’s assuming, of course, they don’t skip right to the playoffs.

He envisions a 10-day camp focused on conditioning, film, practice in all three phases and intense scrimmaging to make sure they’re ready if the call is made.

Problem is, nobody knows when that call may come, or even if it will. If it doesn’t Evason’s status as head coach hangs in the balance. He’ll be considered to be the next Wild head coach, but Guerin will open up a bigger search.

The Wild have played well under Evason, but 12 games is a small sample size.

“When you get a position like this, you want to have the opportunity to show as much as you possibly can. Hopefully we’ve done enough to show that we can do the job and do the job going forward. That is certainly, obviously out of our hands,” Evason said. “There’s nothing we can do about it now except keep trying to prepare. If things were to start up, then we’re ready to go. I think as a coaching staff, we feel good about what we did in the short term that we had the opportunity to do it.”

Evason has taken time to enjoy a transition in life away from hockey due to the Covid-19 pandemic and being stuck inside his Twin Cities home. He gets outside when he can to play golf, has a stationary bike inside and has even turned a spare bathroom into a hot yoga studio.

He’s also getting back to something he hasn’t done much since his playing days: Reading novels. He recently finished reading “99: Stories of the Game by Wayne Gretzky,” and Mick Jagger’s book. Next on his list is Joe Torre’s book, “The Yankee Years.”

He’s got new-found time on his hands with his wife away from home. She’s a flight attendant based in Montreal, and they’re used to having a long-distance relationship.

Evason doesn’t know when they’ll get the call, or even if they will, but he insists the Wild will be ready if they get their opportunity. If they play the rest of the regular season and playoffs, they would have 13 games left to make the playoffs, and it might be in empty arenas.

They’re preparing for any scenario, and it might serve as a pseudo job interview.

“As a staff, getting as prepared as we can if the season goes. I think that’s all we can do. It’s day by day and we’ll see what happens. If they tell us tomorrow that we’re going to play in a week or so, we’re ready. We’re very confident that we’re ready to go once they let us know,” Evason said.