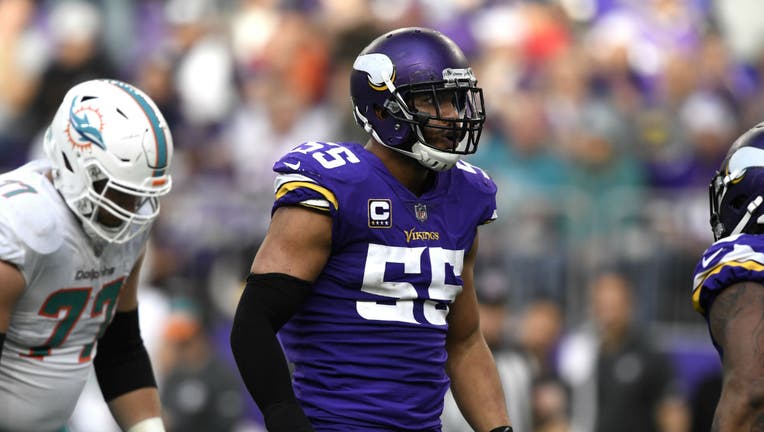 MINNEAPOLIS - The Minnesota Vikings are off to an 0-2 start, and they’ll be without one of their top defensive players for the rest of the season.

Mike Zimmer confirmed Monday that linebacker Anthony Barr will be placed on injured reserve after tearing his pectoral muscle. Barr played 16 snaps on defense and didn’t record a tackle in Sunday’s 28-11 loss to the Indianapolis Colts before leaving the game with an injury. He did not return. Barr had six tackles in the season-opening loss to the Green Bay Packers at U.S. Bank Stadium.

Zimmer said Monday Barr is out for the season. Barr is a four-time Pro Bowl pick and one of six captains for the Vikings this year. He was the first player Zimmer took in the 2014 NFL Draft.

“Anthony was our first draft pick that we had when we came here, an integral part of the defense. Good leader, great guy, it’s tearing him up inside that he’s not going to be able to play. It is what it is and we’ve got to move on,” Zimmer said.

The injuries continue to pile up for the Vikings. Defensive end Danielle Hunter is out at least one more game, offensive lineman Pat Elflein as placed on IR with a thumb or hand injury and is out at least two more games and rookie defensive back Cameron Dantzler missed Sunday’s game with a rib injury.

Without Barr, the Vikings gave up 354 total yards, including 151 rushing yards and 24 total first downs, in Sunday’s loss.