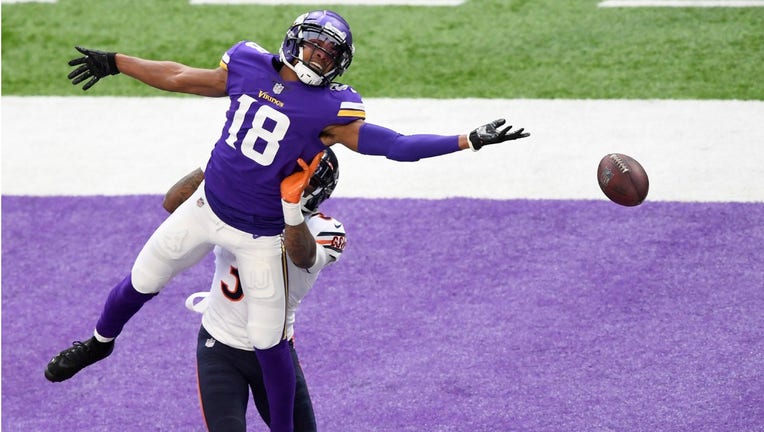 Justin Jefferson #18 of the Minnesota Vikings is unable to make a reception in the end zone as he is defended by Eddie Jackson #39 of the Chicago Bears during the first half at U.S. Bank Stadium on December 20, 2020 in Minneapolis, Minnesota. ((Photo by Hannah Foslien/Getty Images))

MINNEAPOLIS - It was late in the first half of the Minnesota Vikings’ 33-27 loss to the Chicago Bears Sunday.

Kirk Cousins was trying to hit Justin Jefferson in the back of the end zone for a touchdown, but the throw sailed over Jefferson’s head. The rookie then became the victim of a hot microphone in an empty stadium, due to the COVID-19 pandemic. Jefferson was heard reacting in frustration to the play, saying "F*** Kirk! Come on, throw the flag!"

Whether there was a miscommunication on his route or Cousins missed the throw, video of the play went viral on social media. Jefferson went to Twitter after the game and said, "Y'all love blowing stuff out of proportion. And I ain't no diva don't get it twisted."

Jefferson addressed the situation on Tuesday as the Vikings prepare to face the New Orleans Saints on Christmas Day.

"A lot of people are really just blowing it out of proportion. It’s just a lot of emotions throughout the game. Kirk’s my guy, everybody knows Kirk’s my guy," Jefferson said. "It’s just the emotions involved, just frustrated during the play, but that one had nothing to do with me and Kirk."

Jefferson, the team's top draft choice this season, has made a splash as a rookie. He's got seven touchdowns, is eighth in the NFL with 1,182 yards and leads the league with 21 catches of at least 20 yards. He's averaging 16.2 yards per catch.

After the Vikings traded away Stefon Diggs in the offseason to get Jefferson, the rookie wanted to make it clear he doesn’t seek drama. Jefferson was named to the Pro Bowl on Monday, and set the team’s record for receptions in a season with 74, breaking Randy Moss’s old mark. Diggs and Moss brought drama, and Jefferson wants nothing to do with it.

Fellow wide receiver Adam Thielen can relate. Two years ago, cameras captured him and Cousins having a heated conversation during a game against the Chicago Bears. It was a game the Vikings had to win the reach the playoffs, and they lost. Thielen said it comes with the territory, but went out of his way to call Jefferson a great teammate.

"It’s a bummer nowadays with just social media and obviously with no fans in the stands, the hot mics are a little hotter. But definitely isn’t an implication of who Justin is as a player, one of the most selfless people that I’ve been around as a receiver," Thielen said. "Obviously wants the football, wants to help the team win, but he’s a great teammate."

Jefferson is on his way to becoming a star in the NFL, but has no desire to be called a diva.