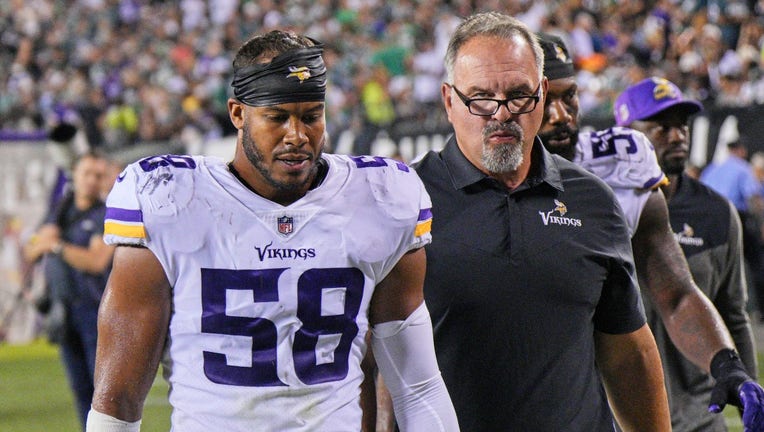 MINNEAPOLIS - The Minnesota Vikings were riding high after a 23-7 win over the Green Bay Packers to open the Kevin O’Connell era.

Monday night? A good old-fashioned punch in the mouth on the national stage. Jalen Hurts torched the Vikings’ defense for 390 total yards and three touchdowns, two with his legs. Kirk Cousins had three second half interceptions, all on drives within the Philadelphia 30-yard line.

Minnesota’s Lewis Cine is set to make his NFL debut on Monday Night Football in a few hours. FOX 9’s Dawn Mitchell has the latest from Philadelphia where the Vikings are set to kick-off in a few hours.

Pretty much everything that could go wrong for the Vikings in one game did. Defensive breakdowns, dropped passes, turnovers and abandoning the run game. It was a debacle and there’s no getting around that, but as hard as it is to believe, a few things did go right on Monday night at Lincoln Financial Field.

The Vikings left the field after being dominated in a 24-7 loss and spoke with reporters before flying home. O’Connell took the podium and pointed the finger directly at himself when placing blame.

"Ultimately, I think this one is on me. I don’t think I did enough, ultimately I have to put us in better positions. I told our team that I'm going to work like crazy to make sure that this does not happen again," O’Connell said.

Some call it clichéd coach speak. Well, we rarely got that tone from Mike Zimmer after losses. He was often critical of players in bad games, and rarely looked himself in the mirror. O’Connell took responsibility for several failures in the loss, which is what a head coach should do. Now, let’s see how O’Connell and company respond from their first true adversity. They’re hosting a Detroit Lions team that just got its first victory, and put up 35 points on the Eagles two weeks ago. The Vikings cannot afford to go to London 1-2.

Kirk Cousins had a rough night, they couldn’t run the ball and the defense gave up big plays. About the lone bright spot on Monday? Special teams. Ryan Wright showed why he won the punting job into training camp, averaging 49.2 yards on five punts, with a long of 58. Patrick Peterson blocked a field goal, which at the time, kept the Vikings in the game. Kris Boyd recovered and tried for the scoop and score, but was tracked down from behind by Arryn Siposs. The Vikings’ special teams unit was mostly a bright spot on an otherwise brutal night.

In his return to Philadelphia, Jordan Hicks made one of the few big plays for the Vikings’ defense. Kenneth Gainwell bobbled a pass from Hurts, and Hicks not only got the interception, but returned it to the Eagles’ 9-yard line. Trailing 24-7 at the time, it was the must for the Vikings to turn it into points. That didn’t happen, with Cousins heaving a prayer for Justin Jefferson that turned into Darius Slay’s second interception of the night. Hicks is already making an impact for the Vikings alongside Eric Kendricks. Hicks led the defense against the Packers with 14 tackles and a sack.

As bad as Monday Night Football was for the Vikings, it’s now about responding. The only option is to move on, find a way to beat the Lions and head to London to face the New Orleans Saints with a 2-1 record.