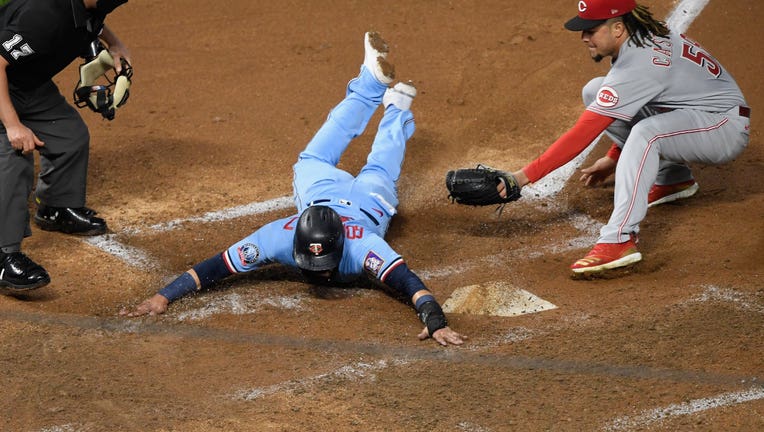 Marwin Gonzalez #9 of the Minnesota Twins slides safely into home plate as pitcher Luis Castillo #58 of the Cincinnati Reds fails to apply the tag in time and umpire D.J. Reyburn #17 looks on during the fourth inning of the game at Target Field on Se (Hannah Foslien / Getty Images)

MINNEAPOLIS (FOX 9) - The Minnesota Twins will have a chance to clinch the American League Central on Sunday as the team wraps up a COVID-19 shortened regular season at home.

A win on Saturday brought the Twins magic number to one. That means a Twins win on Sunday or a White Sox loss would allow Minnesota to clinch the division.

The Twins are currently slated as the third seed in the American League. Both the Twins and the White Sox have already clinched playoff berths and will both make a postseason appearance. The Twins were able to clinch home field in the Wild Card series with Saturday's win. They are set to play the Astros in the opening, best-of-three round.

The Twins will end the season against the Reds starting at 2:10 p.m. on Sunday. The wild card round is set to begin on Tuesday.

This year, because of the shortened season, the postseason has been expanded to eight teams in each league, with all 16 teams playing in the wild card.

Playoff games will also take place in separate bubbles as part of an effort to protect against COVID-19 spread.