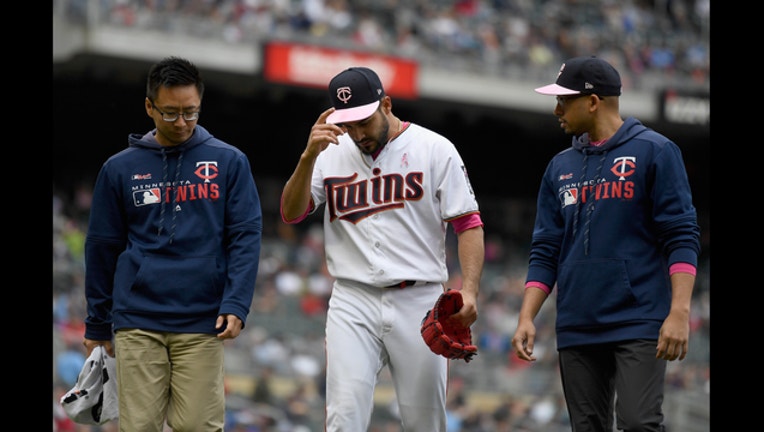 Martin Perez of the Minnesota Twins walks off the field after being hit by a ball that went for a single off the bat of Nicholas Castellanos of the Detroit Tigers in the sixth inning Sunday at Target Field. (Photo by Hannah Foslien/Getty Images)

MINNEAPOLIS (FOX 9) - With his family in town for his first game back from the injured list, Willians Astudillo and his mother practiced at his apartment what would be a special moment for both of them before Sunday’s series finale between the Minnesota Twins and Detroit Tigers.

She was throwing out the ceremonial first pitch on Mother’s Day at Target Field. She threw her son a perfect strike, and the two shared a hug and kiss after. Unfortunately for Astudillo and the Twins, it didn’t result in a win Sunday, or a series win over the Tigers.

Astudillo left six runners on base Sunday as the Twins lost 5-3 to settle for a series split. The Twins left 10 runners on base total in the game as Detroit’s bullpen played with fire late. Minnesota’s top six hitters went a combined 3-for-27 Sunday. The bottom three went 7-for-10 and produced the run-scoring opportunities.

"I was very pleased with the way that we swung the bats, it just didn’t result in much. We had chances and it just wasn’t our day," Twins manager Rocco Baldelli said.

It was the first loss of the season for Twins' starter Martin Perez, who had gotten off to a 5-0 start. It was also the end of a hectic week, but special week, for Perez. He left Toronto after shutting out the Blue Jays on Monday to be with his wife, who was about to have their baby boy. Martin Perez, Jr., was born on Thursday. Just in time for the family's first Mother's Day.

"Happy to have another member of my family. Great game, there was a lot going on this past week but at the same time I’m happy to have my baby," Perez said. "I’ve got another thing to go out there and do my job, compete and give a lot of respect for this team too."

Daniel Norris got the win for the Tigers, pitching into the seventh inning and allowing two earned runs on six hits with five strikeouts. He retired the first eight Twins before Byron Buxton singled to center in the third.

The Twins finsihed with 10 hits and had threats in the fifth, seventh and eighth innings, but couldn't get the tying run home.

Detroit put the Twins in an early hole as Nick Castellanos hit a two-run homer in the first off Perez. Brandon Dixon added a blast to left in the third to give Detroit a 3-0 lead.

Perez left the game early in the sixth inning after taking a line drive from Castellanos off his ankle. The ball came off Castellano’s bat at more than 105 miles per hour. Perez walked off under his own power and was listed as day-to-day after the game with a foot contusion.

He allowed three earned runs over five-plus innings while striking out seven. Perez said after the game that Castellanos "got me pretty good, but it's not too bad. I'm OK. I'll be ready for my next start."

“He seems OK. He seems like he’s going to be fine. I wouldn’t say bouncing around, but I think we may have avoided one,” Baldelli said.

Designated hitter Nelson Cruz left the game in the seventh inning with a wrist injury, and will have an MRI on Monday.

The Tigers added two in the seventh on a Niko Goodrum sacrifice fly and Miguel Cabrera RBI single to take a 5-0 lead before the Twins started their comeback.

Ehire Adrianza got Minnesota on the board in the eighth with an upper deck home run to left. Jake Cave scored on a Buxton single, and Marwin Gonzalez drew a bases loaded walk to get the Twins within 5-3. Buck Farmer struck out C.J. Cron with the tying run at second to end the threat.

The Twins had another threat in the eight with runners on second and third with two out, but Astudillo popped out to the shortstop to end the inning.

Buxton, Cave and Adrianza had a combined seven of the Twins’ 10 hits in the game, scored all three runs and accounted for two of the three RBI.

The Twins exit the series with a 25-14 record, and entered the day with a five-game lead over Cleveland in the American League Central Division. They host the Los Angeles Angels of Anaheim for a three-game series starting Monday night at Target Field.